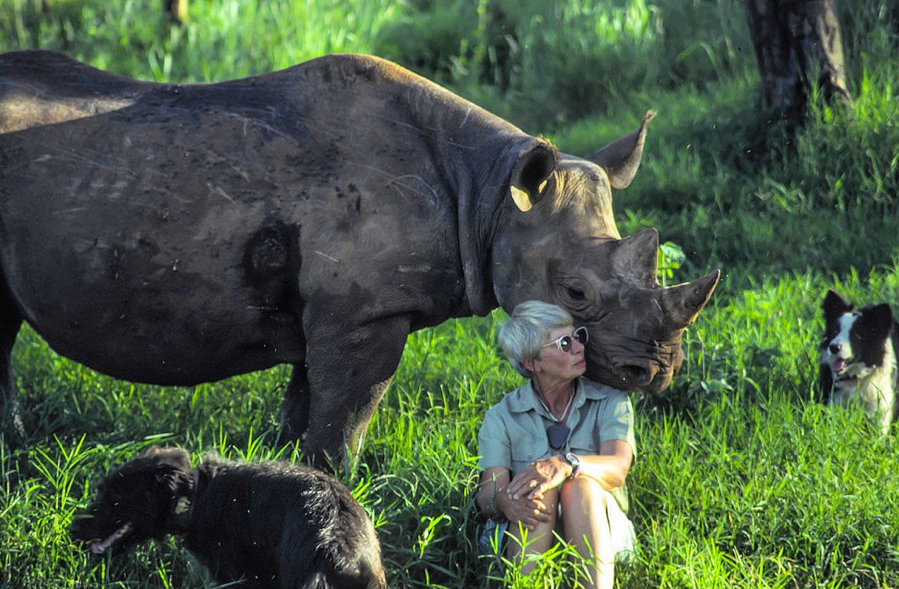 Anna Merz with Samia. The rhino would follow her around like a dog even after she was grown.

Anna Merz, who went to Kenya seeking a serene retirement but became so appalled by the slaughter of black rhinoceroses that she helped start a reserve to protect them, becoming a global leader in the fight against their extinction, died on April 4 in Melkrivier, South Africa. She was 81.

The Lewa Wildlife Conservancy, the reserve she founded, announced her death. She left no immediate survivors, but more than 70 black rhinos, including one born the day she died, continue to thrive in the sanctuary that she created to protect them from poachers .

protect them from poachers.

As a young woman, Mrs. Merz roamed the world and ended up in Ghana, where she became active in wildlife conservation. She and her husband went to Kenya to retire, but her revulsion at seeing the carcasses of rhinos strewn about a national park, each missing its distinctive double horn, compelled her to change her plans.

She started looking for land to use as a rhino reserve and, after many rejections, found a patron, David Craig, who with his wife, Delia, owned a vast tract in the shadow of Mount Kenya. They agreed to set aside 5,000 acres for the project, which opened in 1981 as the Ngare Sergoi Rhino Sanctuary. It has since grown to 61,000 acres through more land donations and was renamed the Lewa Wildlife Conservancyin 1995.

Lewa’s success helped the black rhino population double to 4,880 over the last decade, still a far cry from the millions that once roamed Africa. Lewa is home to 10 percent of Kenya’s black rhinos, and its efforts have lent substance to the dream of returning the species to its former dominance in northern Kenya.

Lewa rhinos must be regularly resettled elsewhere because the success of the breeding program — the reserve’s numbers grow 10 percent a year — has caused overcrowding and fights.

Mrs. Merz’s example has inspired other wildlife conservation efforts and has helped make the black rhino, which is still critically endangered, a global symbol of extinction prevention.

“I have met many remarkable animal specialists during my life, but none as extraordinary as Anna Merz,” Desmond Morris, the zoologist and author, wrote in the foreword to her 1991 book, “Rhino at the Brink of Extinction.” “What Joy Adamson was to lions, Dian Fossey was to gorillas, and Jane Goodall is to chimpanzees, Anna Merz is to rhinos.”

To Mrs. Merz, rhinos — far from being the stupid, aggressive, ill-tempered sorts many suppose — were beautiful and elegant. She blamed their bellicosity on their poor eyesight, leading them to charge first and ask questions later. She found that rhinos have a sense of humor and that they communicate by altering their breathing rhythms. She read them Shakespeare to soothe them!

Samia, an orphan rhino whom she raised from babyhood, even crawled into bed with Mrs. Merz — not entirely to her delight. Samia would follow her around like a dog, even after leaving Mrs. Merz’s immediate care and returning to the reserve, where she mated and had her own calf. If Mrs. Merz fell, Samia would extend her tail to help her up.

Not realizing how big she had grown, Samia once tried to sneak back into the house where she had been nursed and became jammed in the dining room door. Mrs. Merz had to pour a gallon of cooking oil on her rough skin to ease her through.