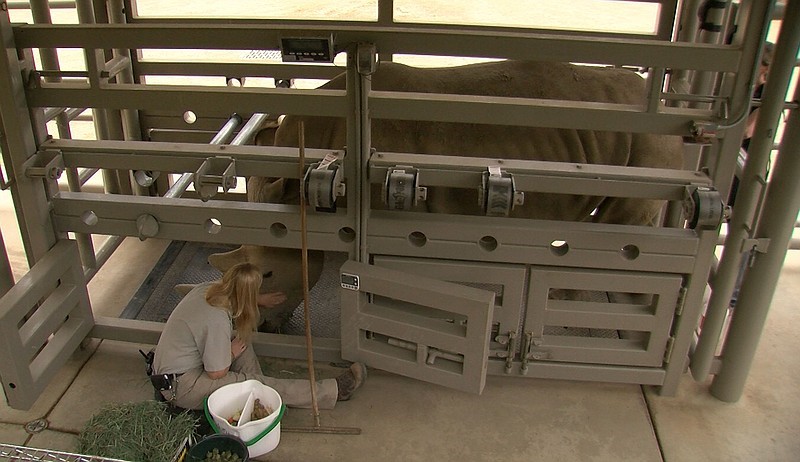 An embryo rests inside the belly of a southern white rhino that was brought to San Diego with five other female rhinos about two years ago.

On a morning earlier this week, Victoria, a southern white rhino, lumbered through a heavy iron gate in the off-view compound set aside for this critical rhino recovery mission. She walked into the holding area looking for a treat and a friendly pat from Senior Keeper Jill Van Kempen.

“Hey, there you go,” encouraged Van Kempen, as Victoria moved into place for her weekly ultrasound.

The white rhino is here at this compound for a regular check-up. And postdoctoral researcher Parker Pennington wanted to make sure the embryo she first spotted a few weeks ago is healthy and doing well. Pennington manipulates an ultrasound wand until it hovers over the rhino’s reproductive organs.

The zoo’s reproductive physiologist Barbara Durrant studies the portable ultrasound screen and then lets out a delicate chuckle.

“She has grown a lot,” Durrant said as she snaps pictures of the rhino’s insides.

“We’re calling her ‘she,’” Durrant said as her smile widened. A female is welcome because she could also become a mom.

Durrant is looking at an embryo that is just short of 2 months old.

“If you look at the screen you can see the fetus. We just did a crown measurement. This is the head. This is the body and when I unfreeze it you’ll be able to see the heartbeat,” Durrant said as she flipped through the pictures and videos that were just snapped.

Victoria gets an ultrasound once a week — that already makes the baby one of the most watched rhino embryos ever.

“She’s facing, she’s on her head,” Durrant said as she pointed out the animal’s feet.

The baby rhino is about 37 millimeters long, a little over an inch — about the length of a typical double A battery. Durrant turns a dial and splashes of color light up an otherwise gray ultrasound video. The machine is using Doppler technology, yes the weather radar used to track violent storms, to make sure that blood is flowing as it should.

Durrant also uses a Doppler feature of the ultrasound machine to see if the blood is flowing as it should. Little explosions of red and blue indicate blood is moving.

Durrant and Pennington have tried artificial insemination with another rhino but this pregnancy is the first to work using techniques developed here. Special tools had to be designed to navigate a tricky birth canal. Protocols were developed for freezing sperm so the material remains capable of fertilization and delivering the sperm at the right time is key.

Success Not An Accident

Pennington said Victoria got pregnant on the first try, and that’s because there was a viable egg.

“We tracked that ovary. Induced her ovulation. And made that happened before we inseminated her, because of the frozen sperm we were using. We wanted to make sure it was a successful ovulation,” Pennington said.

Pennington was not expecting to see an embryo when she examined Victoria some 18 days after the insemination attempt. But Pennington calls it a happy surprise.

“It’s amazing how quickly all of this happened, from these females coming in from the wild. And being trained. And now we have a pregnancy from an artificial insemination. In just a little over two years. It’s awesome,” Pennington said.

The team is focused on making sure each of the six female rhinos in this program become a mom because that will be the key to helping their critically endangered cousins, the northern white rhinos. Only two members of that species remain on the planet and neither are capable of breeding.

“In the long run, in the very distant future when we are able to do embryo transfer and we have a northern white rhino embryo and we can put it into a southern white rhino for gestation. We’ll be able to follow those same landmarks of growth and development,” Durrant said.