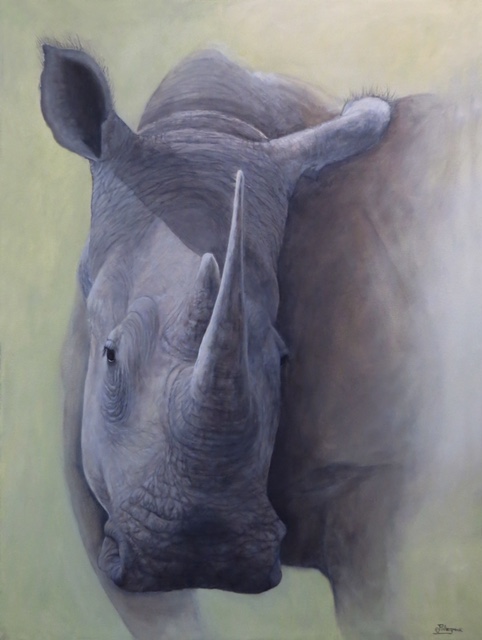 "While travelling through the Kruger National Park, South Africa, in 2017, we came across a male rhino who had been fighting with another male in the dried up river bed. Two other rhinos hastily fled the scene with the angry male hot on their heels. The two females passed through the narrow gap between our vehicle and the one in front of us. The male came up the bank shortly after in hot pursuit. As he passed in front of our vehicle in very close proximity, he stopped dead in his tracks turning his head to look directly at us. We all took a deep breath as there was nowhere for us to flee as we were sandwiched in between two other cars. For a brief moment this gigantic animal contemplated his next move! Luckily for us he decided to continue his pursuit of the other two female rhinos.

'Nguvu' was inspired by that moment he turned to look directly at us.

This encounter certainly puts life into perspective and how insignificant we humans are in the scheme of things. The fact that these animals are being persecuted beyond belief is a reminder that we may lose these animals altogether in the not too distant future. Witnessing them in the wild will become a distant memory. The work that Baby Rhino Rescue does towards saving the orphans left behind in the wake of wildlife crime is of great value to preserving the species." - Paula Wiegmink