Boy proves nobody is too young to save rhinos 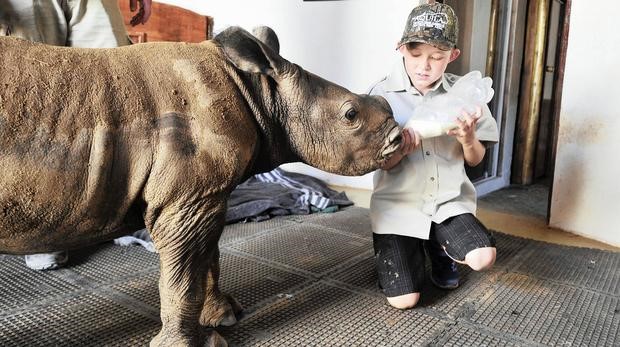 A 10-YEAR-OLD local activist has received global recognition for having a positive impact on the environment, with his efforts to save rhinos.

His mission started on Christmas Day 2015, when he heard about a baby rhino abandoned in the middle of the night by its mother.

He knew that without help it would die and anxiously followed its progress on social media.

Starting with his own pocket money, he began raising funds from family and friends, then set up a Facebook page.

He felt inspired to save that one baby rhino, named Osita, but soon  he learnt about the poaching crisis and felt compelled to do even more.

“My family has been converted into rhino mad warriors,” said Hunter.

“Keeping rhinos, elephants, lions, pangolins and so many more animals safe from extinction is going to need warriors, and I will always be one of those warriors.

“I am only 10 and know my journey is just beginning.”

Hunter’s love of rhinos shone through when he visited the Aquila Private Game Reserve that saved Osita, and opened a rhino orphanage that cares for Osita and other orphans.

There, wildlife conservationist Divan Grobler taught him how to care for the rhinos.

He helps to walk the animals, prepare their food, feed them and coat them with protective mud. The rhinos recognise him and come running to nudge him.

Hunter has made presentations to more than 10000 schoolchildren, locally and over Skype in Asia, and on a trip to Australia where he was impressed to meet environmentalist Bindi Irwin.

He has filmed documentaries and videos to distribute online, and for the past two years he has organised a big event for World Rhino Day.

Earlier this year he won the Eco-Youth Gold Award at the #ecologicawards.