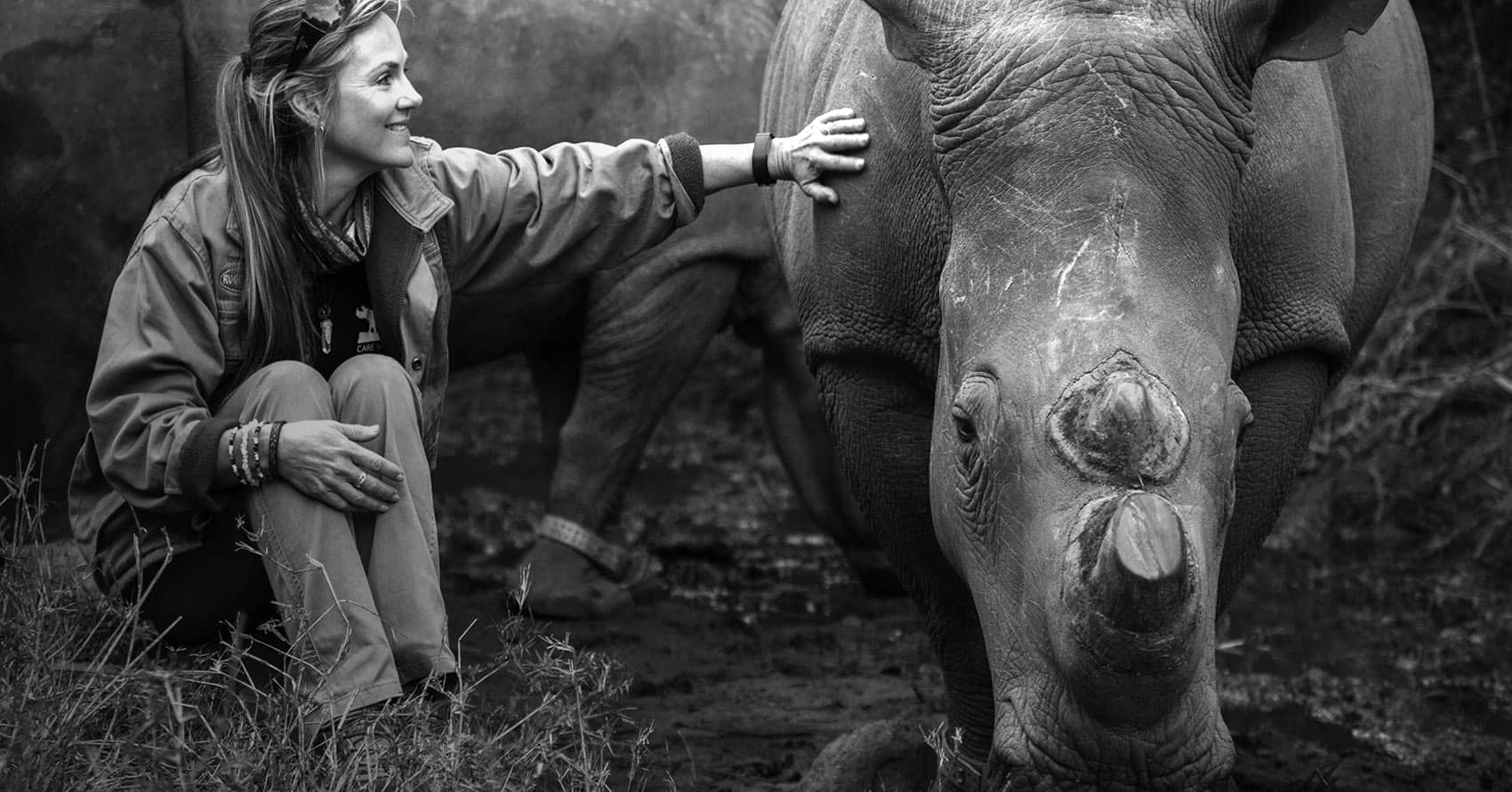 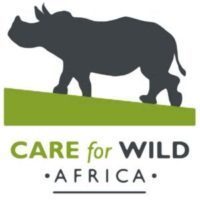 The biggest rhino sanctuary in the world, Care for Wild rescues and rehabilitates rhino calves that have been orphaned due to poaching in Kruger Park. These rhinos are then released into secure strongholds that are protected 24/7 by armed guards and dogs. Baby Rhino Rescue is intrinsically involved in the rehabilitation and release phases at Care for Wild. Defenseless babies arrive injured and compromised, sometimes requiring urgent medical care. The rehabilitation process is complicated and expensive; we help by donating funds for milk, supplemental food, medication, and the construction of critical structures to ensure the continued health and well being of the calves.

Once the rhinos are rehabilitated, a process taking two years, they are released into guarded strongholds on the CFW property. Rhinos will be saved from extinction by privately funded strongholds. These wild areas include electrified perimeter fencing, trained and armed guards, vicious anti-poaching dogs, mounted patrols and much more. BRR has funded three strongholds at the Care for Wild Rhino Sanctuary. These allow the rhinos to live their lives as wild creatures, eliminating all human contact. The ultimate goal of these strongholds is to provide a space for the rhinos to be wild, safe and to begin breeding. It is cutting edge in rhino conservation. 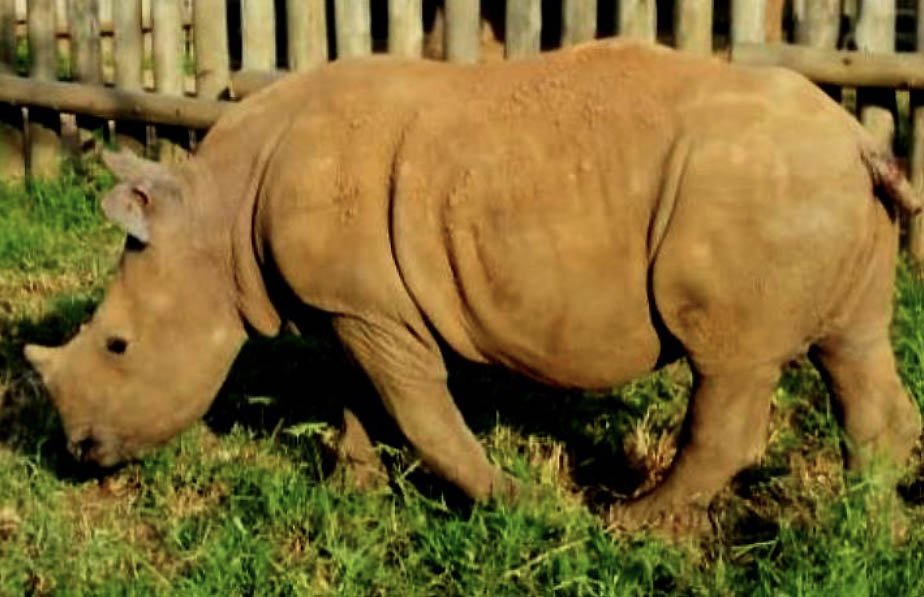 The young calf was darted, rescued and immediately placed on a drip, then loaded onto the trailer and he began his journey to safety 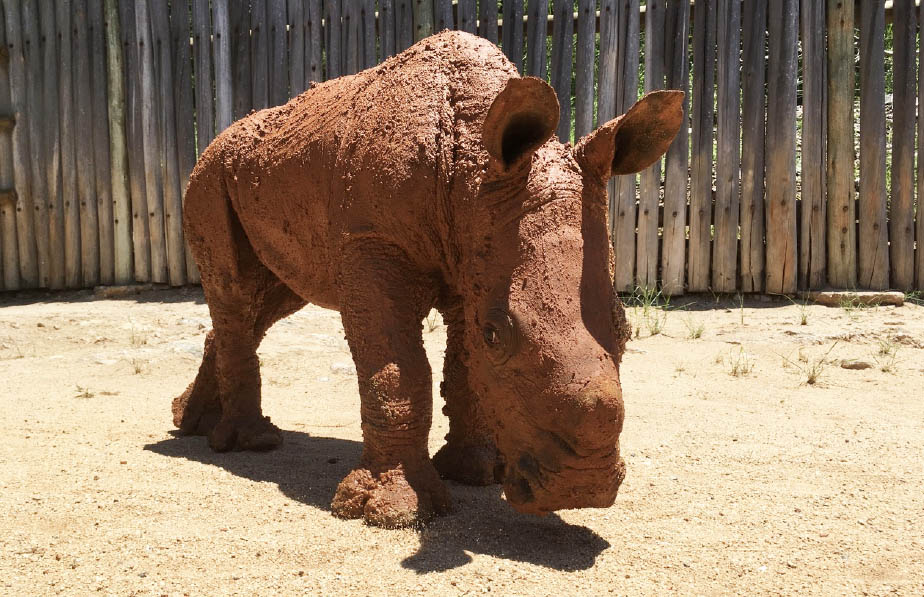 At the end of 2018 a very young, female white rhino calf was spotted running around on her own in the Kruger Park. Rangers were alerted. 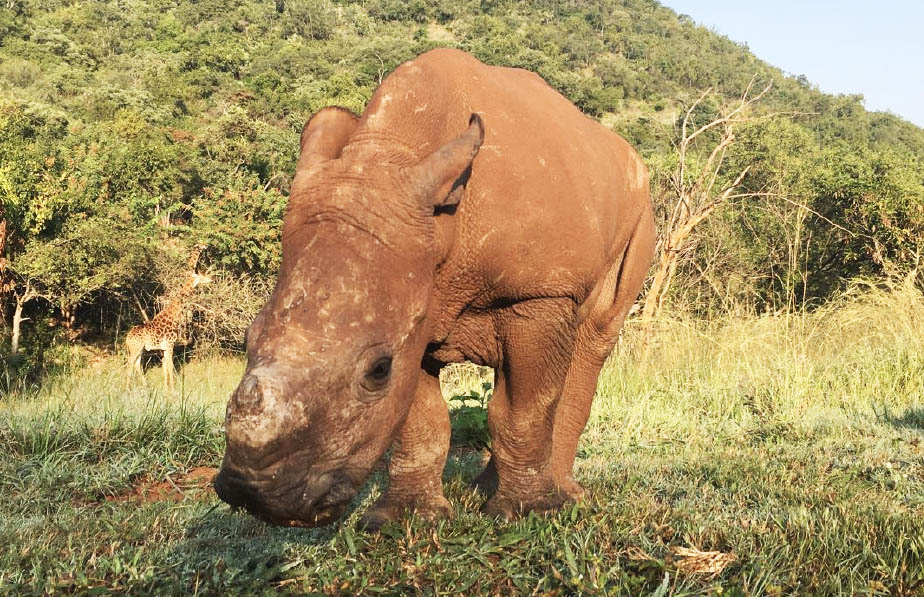 Mayar, meaning moon glow, was rescued on the 7th of June 2019 from the Greater Kruger area 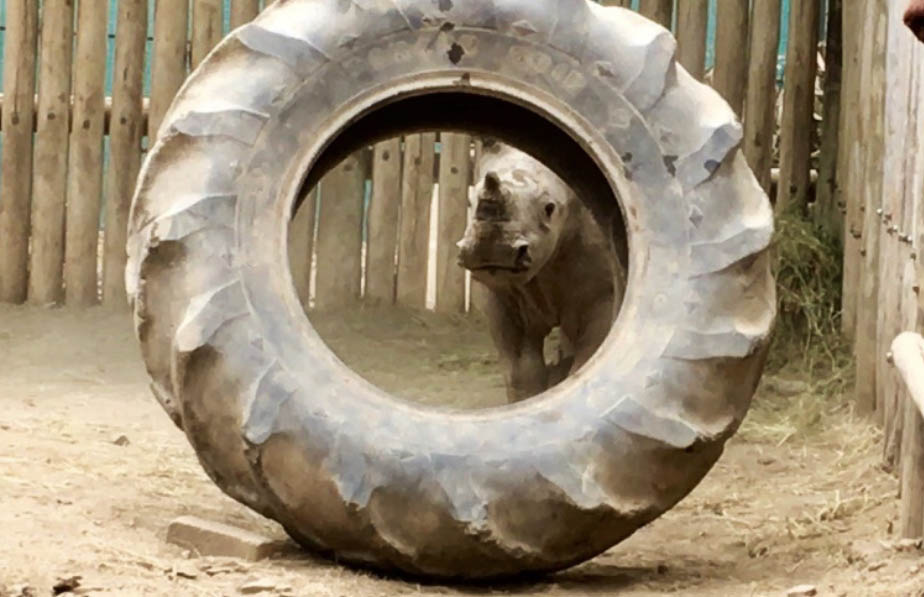 Zac was found beside his recently poached mother in the Kruger National Park. 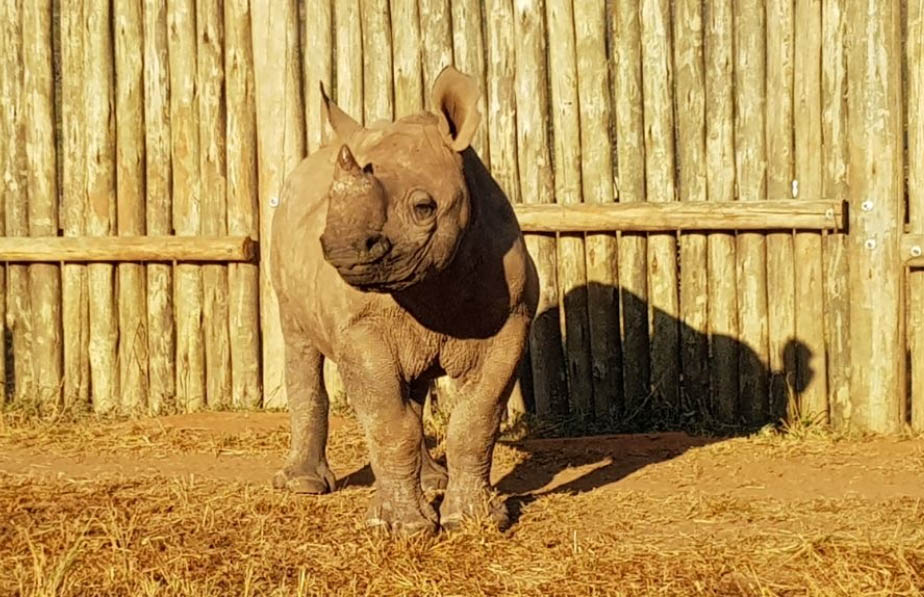 A black rhino cow was found shot in the Kruger NP. Rangers and vets flew over the carcass to see if there might be a calf nearby. 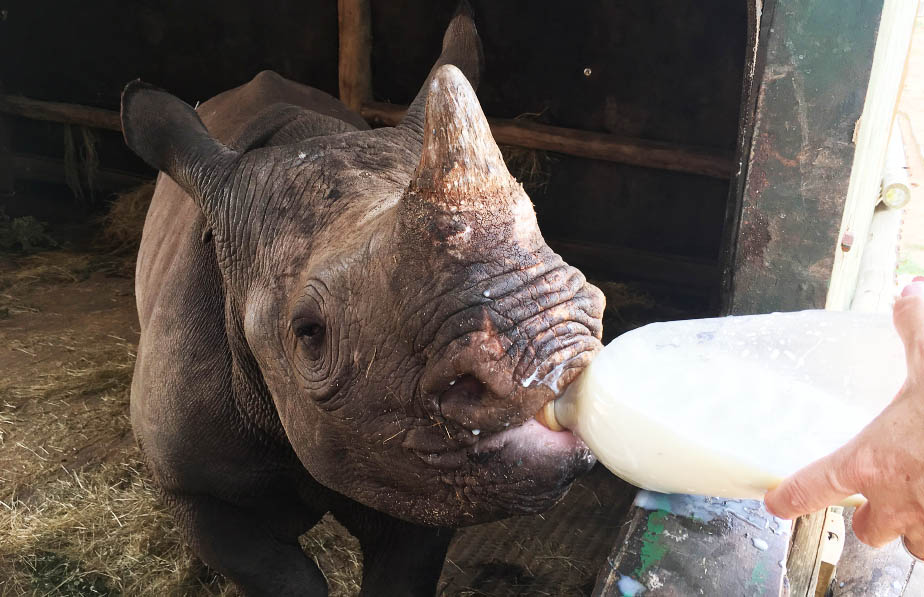 She was 18 months old, and in good condition. The following day, she was eating and drinking water from a trough, so her blindfold came off 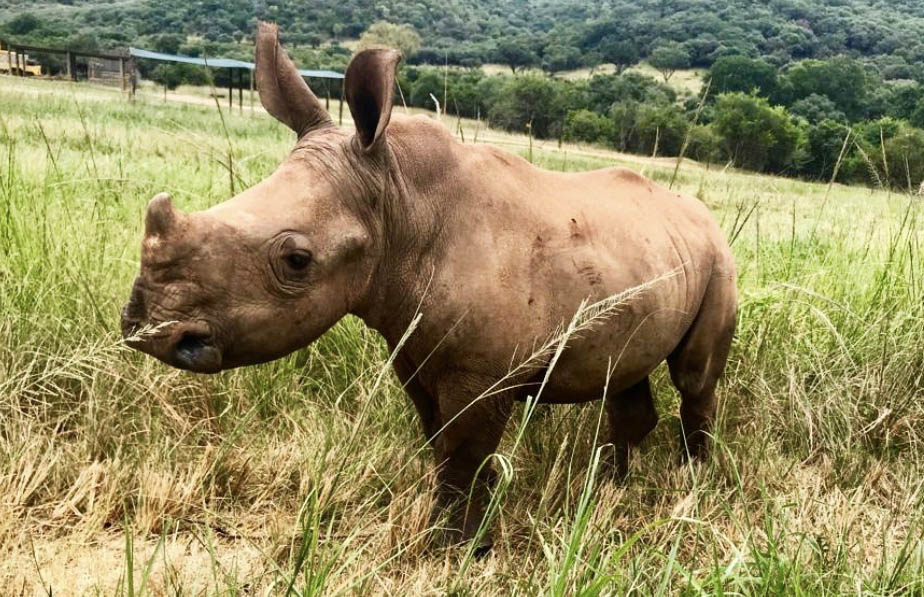 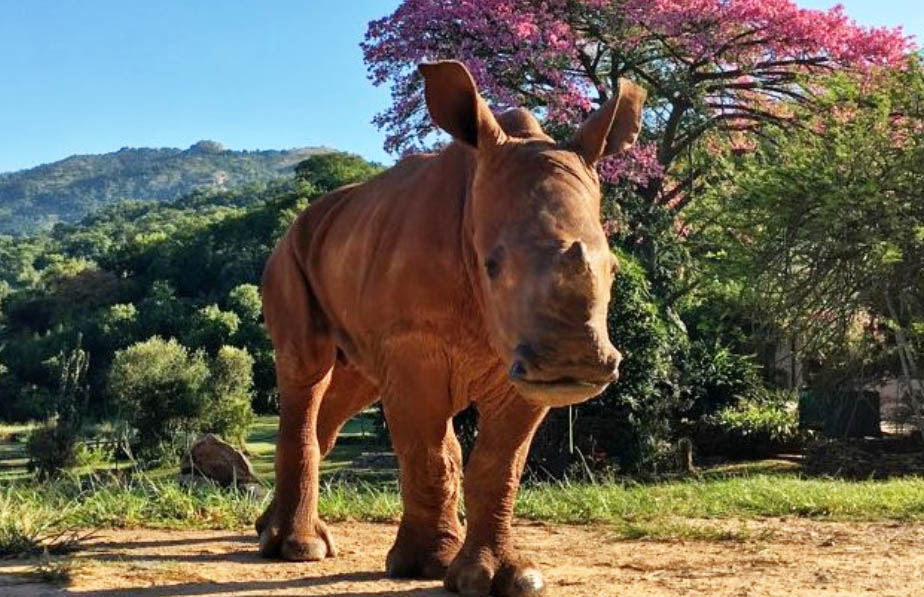 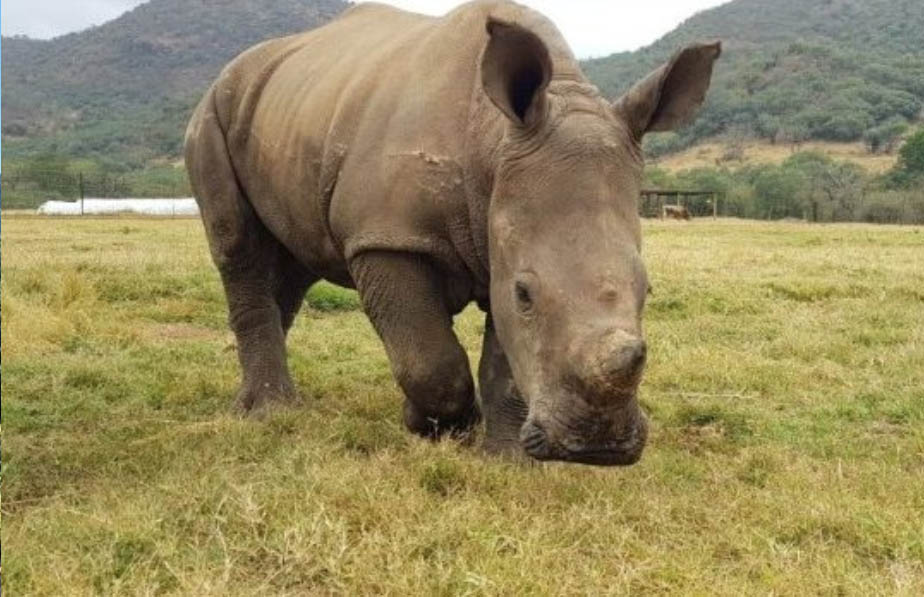 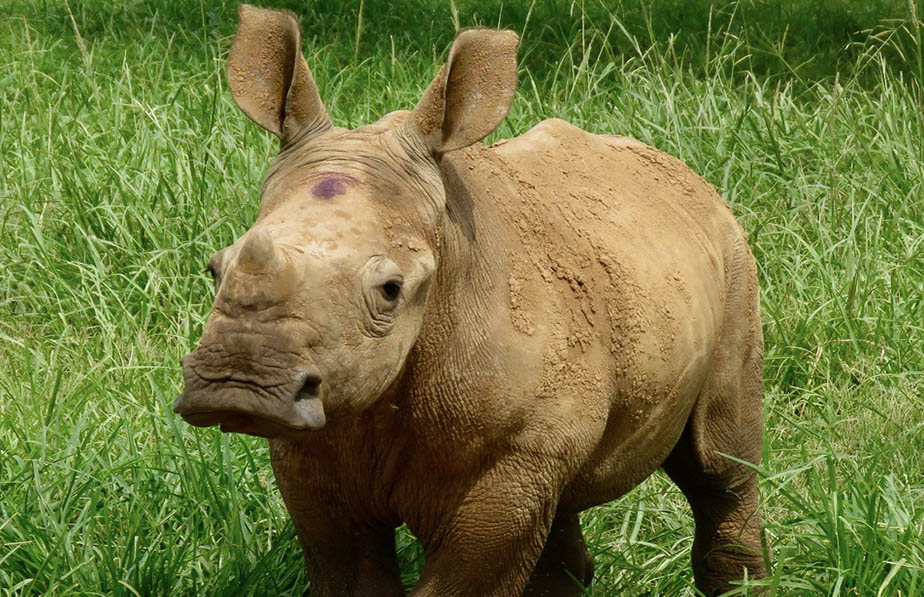 Arthur is called Arthur the brave for good reason.

IT TAKES AN ARMY TO KEEP THE RHINOS SAFE!

Trained and armed, the guards monitor the rhinos in bomas and strongholds 24/7. With an extraordinary access to these wild creatures, the guards have a special understanding of the rhino. Meet some of the guards:

“What is so sweet to me is how the rhino loves its baby.” He shakes his head, full of emotion. “I love that about the rhino.”

Freddy is 27 years old. He was born in Ntwane and is one of the newer members of the ranger team.

He is eager to learn and shows great potential. If he is sent on patrol, everything is committed to the job at hand.

“I want to look after animals, protect them and make sure that they are safe from poachers. This is why I am here, because nature must continue.” He has impressed his co-workers with his genuine love of nature.

When talking to him, it is clear he appreciates the beauty of the animal that is his job to protect. “We have to keep these rhinos safeso that people from the world can come to our country and see what a rhino is. They are so big. And they are so beautiful and what always makes me amazed is how relaxed they are when they sleep.”

“Rhinos are important for us and for the future. For me this is a personal fight.”

Nkosinathi was born in Barberton. He is a single dad with two children.

He is considered one of Care for Wild’s best scouts. When he is told to do a patrol, Nkosinathi can be counted on to literally go the extra mile. Even on rest days, he stays to do patrols.

He has a fierce passion about ensuring that the rhinos remain safe from poachers. “I love the rhino, he shows me different things and he brings tourists to my country. I feel very bad about poachers, they finish our rhinos, but we cannot and must not allow this.”

“If you look after nature, nature looks after you. The rhino is part of the big picture. How can we treat the rhino badly? Rather we must treat him well. We must take care of him. This is my job and I am proud to be doing it.”

Steve is 50 years old and happily married with three children.

He is one of the newer rangers on the team and is excited to be part of the unit.

“I want to be here,” he says. “I feel very strongly about protecting the rhino. They are important for our community. People kill rhinos, this means that our children will not know what a rhino is. That is not right.”

He loves working in the bush. “Nature is very important. The trees bring fresh air. We might take that for granted, but we should remember it.”

I want to see all future generations find a protected nature, the way that God made it. God would want me to do this job. If you think on it: the idea is to be beautiful and for this world to be beautiful.

Frank is 42 years old. He was born in Dennilton and is one of the newer members of the team, nevertheless he gets results because he listens so carefully.

He is very committed to his task and always fulfills his obligations with a passionate dedication.

Frank started out as a firefighter. “I am well trained and physically fit and I train day by day,” he says. “I want to protect rhinos, they bring so much to our world. So many species of animal could not survive if not for them. If you think simply that they spread their dung around and it makes the land fertile.”

He looks at the land that moves him so deeply.

“Nature is creation. Nature is a chain. The trees give us oxygen and in turn we give them carbon. We need each other to survive.”

Jeffrey is 28 years old. He was born in Dennilton, far from where he works now, protecting the rhinos.

He is eager, hard-working and hungry to learn.

He asks questions on patrol, is always alert and sees the small details that often escape others. Jeffrey is also considered to have very keen eyes making him an important member of the ranger team. He can be counted on for smiles every morning. His aim is to learn as much as he can about nature.

He feels passionate about protecting the rhinos. “When I think that day by day people kill rhinos it makes me want to try everything I can to keep them safe. When poachers say: ‘If I kill a rhino, I get money,’ my reply is: ‘What about our future generations?’ They don’t know how beautiful this Africa with its rhino is. How can you want to take that away? And when you take this away, tourism goes down, which takes away our money.”

“If we lose these rhinos, a part of South Africa and the world dies forever.” He shakes his head. “If more people could only see it this way.”

Douglas is married with five children and comes from Hectorspruit.

He is one of the most experienced rangers and an excellent scout. He is considered the ranger with the most burning passion for nature.

“For me the animal is the same as the human in this way: If you handle it properly it becomes a friend,” Douglas says and his eyes fill with emotion. “I go on patrol earlier so I can see the rhinos before the sun goes down. I am passionate about them.” He shows his cell phone which is full of rhino pictures. “I have so much pride that when I sit with rhinos at night they come and sit with me. When the rhino feels you are a friend, it makes little noises to show it knows that. When I do patrols, I walk slowly and surely. That is why the rhinos trust me and approach me. If you are steady with it, it is steady with you, same as with humans. If you are good to someone, that person is good to you. So, it is up to you.” For Douglas it is that simple.