Horns of a Dilemma; Managing and Protecting South Africa’s Rhinos 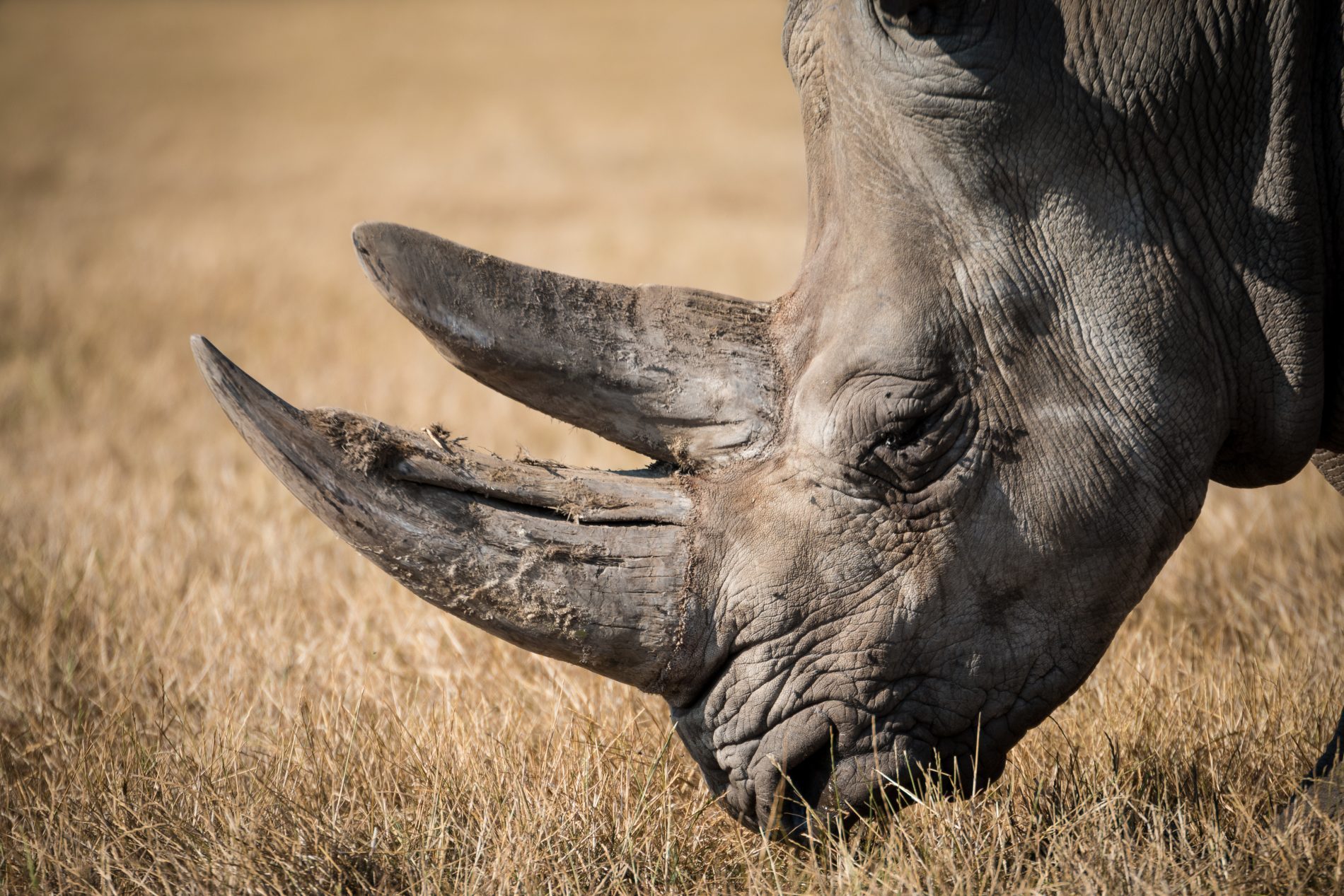 Covid 19 has shone numerous spotlights on the world’s problems including how we interact with the natural world. Since the virus was declared a zoonotic one, the fear has grown that there are other potentially lethal viruses lurking in the wild. This has had a few positive outcomes one of which was the enactment of a new law in China on February 24, 2020 which completely prohibited the illegal wildlife trade in China. It was estimated that that market was worth around $75 billion per annum, but the law was aimed at ‘Eliminating the bad habit of indiscriminately eating wild animals and truly ensuring the health and safety of our people’ and appears to have overridden all financial concerns.

This law is good news for live wild animals but it does not seem to cover by-products of wild animals such as horns and bones. Indeed China, which had banned trade in rhino horn in 1993, reversed that ban in 2018 with the qualification that the horn used had to be from sustainable sources and was limited to the use of medicines, scientific research, educational materials and preserving antique cultural artefacts. At the same time as China changed its ruling, South Africa’s courts ruled that trade within South Africa of rhino horn was legal, although it remains illegal across borders due to the CITES convention which bans international trade.

The situation regarding legal and illegal trade in rhino horn is complex and as the financial and social impact of COVID still has to be fully seen, there is a faint glimmer of hope that it might ultimately signal some good news for wild rhinos. A lot however depends on what happens in South Africa which has the largest wild population of rhinoceros in the world. The debate within South Africa as to how this population can best survive is a heated and complex one. Pragmatists discussing the management of the remaining population of rhinos argue that as we cannot beat the buying power of over a billion Orientals, it is better to farm rhinos and use the money earned from legitimately selling their horns in order to protect the species. This view is the dominant narrative currently underscored by the South African government which appears to view wildlife primarily as a ‘resource’, one that draws in the tourists but can also be managed to provide food and economic empowerment as well as turn wild animals into their own financial keepers. The argument is basically that animals have to pay their way or to quote Pink Floyd’s Dogs of War; ‘And you must die, so that they may live.’

Throughout the anti-poaching debate in South Africa there have been subtle and not so subtle undertones which have clearly indicated which side of the divide some conservation organisations are on and which side the SA Parks Board is on. The anti poaching solution for saving rhinos which laid this deep schism open, was one developed by two South African veterinarians; Charles van Niekerk and Lorinda Hern. They came up with a horn infusion method which stains the rhino’s horn with a residue of pink to indicate that the horn is infused with ectoparasiticides which are toxic to humans but not to rhinos, vultures and ox peckers. There are two major advantages to this method. The first is that it means that wild rhinos keep their primary defence weapon and more importantly no damage is done to the overall fabric of rhino society. Secondly it is a deterrent to poachers because no one wants to buy a tainted horn.

It was the second point that exposed the views of South Africa’s National Parks (SANParks) in contrast to those intent on preventing any exploitation of a wild species. The program on infusing horns is successful and very few rhinos with infused horns have been poached. The program however was criticised by SANParks in a paper ‘leaked’ to the press on the alleged failure of the method. One of their criticisms of the infusion method was that it ‘tainted’ the ‘product’ which could have negative implications for the stockpiles of horn owned by SANParks which sees little harm in selling horn legitimately. The stumbling block to this becoming acceptable is CITES, but the ultimate intention of legitimising the trade in horns is clear.

The 2015 – 2020 strategy for management of the rhino population laid out the South African plan for the rhino population and it clearly indicated that while seen as iconic draw cards for tourism, rhinos are basically viewed as a resource to be effectively managed and rhino horn would definitely be a profitable way to fund the future of the species. Added to this document is the 2020 amendment to the South African Meat Safety Act which while it is aimed at making the slaughter of both domesticated and wild animals more hygienic, has loopholes that are worse than a moth eaten lace shawl. Section 7 of the amendment states that the animals it has listed can only be slaughtered in an abattoir, exclusions to this being meat slaughtered for own consumption or for cultural and religious purposes. That exclusion makes the whole amendment a waste of time because anyone can hide behind those exemptions. What is most concerning is that rhinos are on this list as are elephants,python, hippopotami and giraffes to name a few of the very long list. The act is being amended to protect public health but as a result wild life ‘resources’ can be more effectively monetised as exotic wild meat . The act supports the prevention of zoonotic diseases and Covid is certainly strengthening that argument, until you take into account the exemptions for religious, own use and cultural purposes, after all it only takes one animal for a chain of disease to start.

If the 2015 proposed management of rhinos is adopted then there can be no doubt that South Africa will lobby Cites to lift the ban on trade in rhino horn. At the last Cites (COP 18) meeting both Eswatini (formerly known as Swaziland) and Namibia lobbied unsuccessfully for a lifting of the ban on trade in rhino horn. South Africa lobbied for an increase in its annual export quota of black rhinos and was given the green light as long as the total number of hunting trophies did not exceed 0.5% of the country’s total black rhino population. It was an unusual decision given that no one could agree on the actual number of black rhinos in the country. The failure of CITES to agree to the requests of Eswatini and Namibia resulted in some members of SADC wanting to withdraw from CITES.

So as a result of the right to trade in rhino horn internally in South Africa and the somewhat unclear idea of how many black rhinos can be hunted there are legal loopholes but they are not adequate for a full scale legitimate trade in rhino horn. Some of the proponents of that trade have argued that the way to end poaching is to legalise trade and then flood the market. They believe that flooding the market in horns will reduce the price of horn and thus end poaching. The theory is not particularly compelling because the likely outcome will be to create an oriental stockmarket trading in horns which will see people investing in the cheap horn in order to hang onto it for trading purposes as prices go up and down. Ultimately there is only so much land available for rhinos, so the population is never going to increase massively. This makes the horn a very bankable investment for future scarcity and a report by the United Nations Office on Drugs and Crime issued on 23 March 2020 noted that rhino horn was already being sold for its investment value, alongside elephant tusks. The same report contained further interesting findings which might be strengthened in the aftermath of COVID, these are that the price of rhino horn was declining in 2019 and poaching figures showed a small but significant decline.

As there are currently more rhinos in private control than in national parks, it might seem that there is some hope for the species, but a small game reserve with a few rhinos requires massive investment for their protection and most of that money comes from tourism, which is very far from any signs of serious recovery. There are private game owners who have used the infusion horn method while others use dehorning but the cost of performing this in addition to the fencing and 24 hour guarding necessary to protect rhinos is huge and as the baby rhino rescue centres have noticed, some landowners cannot afford to take their orphaned rhinos back. The sad truth is that a dead rhino is worth more than a live rhino as the most valuable part of a rhino is its horn. Nevertheless supporting the private owners who are using the best stop gap possible of horn infusion, is something that gives hope and it points to a way forward that while not ideal, is certainly the most hopeful outcome for wild rhinos.

As the debate in South Africa continues it seems to be clear that any legislation which allows a partial use of any part of a wild rhino merely opens up a pandora’s box of misinterpretation. The fundamental difference between those who view wild life as a resource and those who don’t lies at the heart of the debate. The simplest way to resolve it is to stop thinking of ourselves as being in charge of nature as well as separate from it. We are incapable of managing the huge areas of savannah that rhinos maintain. We do not have the ability to manage the biodiversity of complex systems largely because we don’t fully understand them. If we agree that grasslands are significant carbon sinks which are probably even more valuable than forests, then we can acknowledge that rhinos more than pay their way by sustaining these areas for the benefit not only of other wildlife, but humans as well. It makes much more sense to think of the true value of wildlife in maintaining the health of the planet than it does to focus on the human centric idea of animals paying their way through exploitation of their body parts. We can save rhino if we stop thinking of them in this way and start seeing them as frontline workers in the fight against climate change who are as important to our survival as we are to theirs. It might be as simple as that.