How Africa’s only Black Hawk Relocated a Rhino 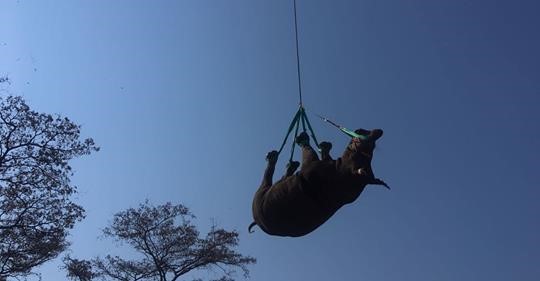 MBOMBELA – Slow and smooth, and smooth is fast. This was the motto for Ebony and Ivory, which recently made world history in the province.

This mammoth operation of relocating a rhino in excess of two tons required a four-bladed, twin-engine, heavy-lifting beast manufactured by Sikorsky Aircraft, and owned by Mark Jackson. The rhino was recently involved in a fight with another rhino on a farm in the Highveld.

The fight resulted in one of them rolling down a valley into the neighboring property, unable to get out. Various attempts to try and chase the rhino out bore no fruit and backup in the form of the highly trained Leading Edge Aviation team was called in. Jackson took delivery of South Africa’s first-ever Black Hawk.

At the altitude (4 500 feet above sea level), a Huey can at maximum capacity lift no more than 1,8 tons. The Black Hawk can lift close to four tons. After careful planning by Jackson, pilots Tosh Ross and Peter Jackson and a well-equipped team were off to the game reserve. Upon arrival, Ross, who has airlifted 200 rhino, properly briefed the team that was joined by a number of vets, before they took to the valley.

Vets had in the meantime sedated the rhino and gave the team the go-ahead. The team had to lower a 40-metre strop to lift the rhino out of the valley. The rhino was successfully lifted and relocated. An antidote was then used to counter the sedative. The Black Hawk can reach immense speeds and the whole process, from take-off in Mbombela until the team’s return, took two hours.

It was the first time that a rhino was lifted by a Black Hawk. The rhino owner thanked everyone involved.