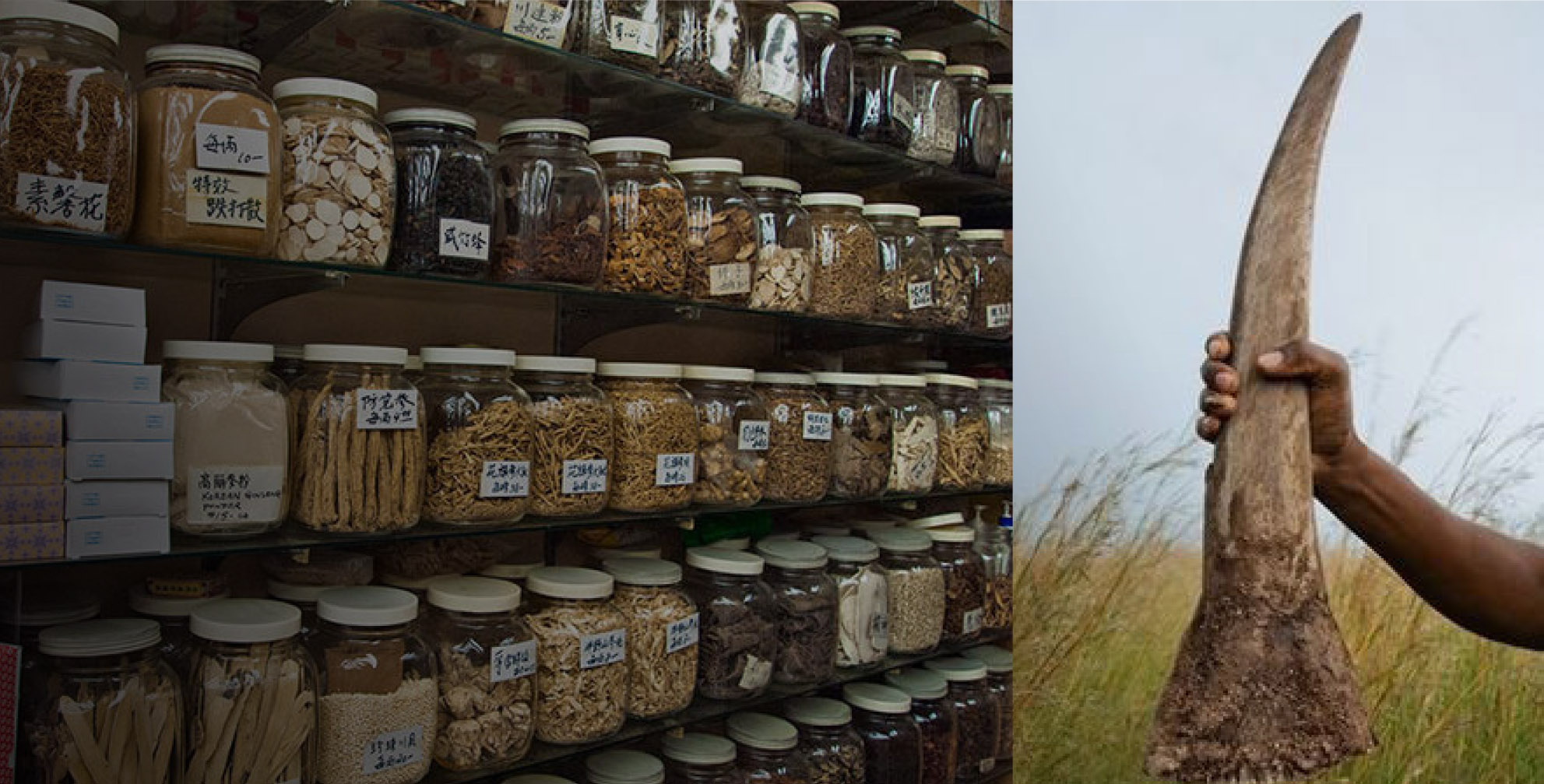 In the last nineteen years rhino poaching has developed from a relatively primitive cottage industry into an industrial scale slaughter.

Millions of dollars have been spent on trying to stop the trade in rhino horn and countless organisations, conservationists and others have devoted considerable energy to stopping the relentless poaching, but the fact is that at the present rate of poaching, the rhino will be extinct in 10 years time.

The logical question is why have so many theories, strategies, conferences and solutions failed? Why when trade in rhino horn has been banned by CITES since 1977 are we seeing small victories achieved at enormous cost but no lasting cessation to the continued slaughter? The answers are complex. Rhino horn has been traded for millennia but there were always enough rhino for both the trade and the rhinos to survive. The main consumers of rhino horn products have largely been Eastern with the demand arc starting in Yemen and ending in China. It is the far eastern consumers, in particular the Vietnamese who have been at the epicentre of the huge spike in the slaughter of rhinos in the last decade. Having poached the last subspecies of Javanese rhino in Vietnam in 2010 they have looked to Africa to supply their growing demand.

The most striking feature of the rapid increase in rhino poaching from 2008 onwards is a result of a confluence of factors. 2008 was a very bad year not only for the world’s economy but for the long term survival of rhinos because it was the year that most of the factors underlying their demise came together.

Zimbabwe which reached 94 percent unemployment in that year was almost flattened by the global crisis which amplified an already failing economy which than went into freefall and desperate individuals turned to any and every resource possible to survive.

Poaching of rhinos increased massively that year with 164 killed as most systems in place to counter poaching collapsed. It was evident as a result of this huge increase that there was a market even for that large number of horns and the money involved made it a worthwhile risk. For criminal networks illegally exploiting wild animals, South Africa which houses 70% of the world’s remaining population became a focus.

Prior to 2008 domestic trade in rhino horn was legal in South Africa. The law created a gap which opportunistic criminals flouted with ease. Vietnamese women were brought to South Africa posing as hunters and the resulting trophy horn would be exported to Vietnam. As it was legal in South Africa the rather sick photos of Vietnamese bimbos posing next to dead rhinos sparked outrage in the country. 2009 saw the ending of the legal export of trophy horn but it had opened pandora’s box. South Africa was where rhino horn existed in relative abundance. The trade route was opened.

There cannot however be supply if there is no demand. Vietnam, which appears to have outstripped China in consuming rhino horn, had been a country ravaged by war in the 1960s. By the mid 1980s it had begun to recover economically. The pace of economic growth increased from 2001 but it was the arrival of large multi nationals that stimulated greater affluence. In 2008 Samsung invested heavily into the economy of Vietnam. Its presence and size of investment encouraged other global players and the race was on. For the Vietnamese this spurred financial growth and new found wealth amongst Vietnamese developed the market for the ultimate sign of affluence, namely possession of rhino horn. This was the key to the demand side for rhino horn. The richer individual Vietnamese became, the greater the demand for horn grew.

Growing demand and supply of an illegal product involving one of the world’s largest herbivores requires that the suppliers become more organised and have more efficient methods of killing. Enter the last piece in the puzzle explaining the massive increase in rhino poaching since 2008. The Czech manufactured high calibre guns which replaced the AK 47’s and other guns stolen from farms and robberies previously used in poaching. These mostly brand new guns manufactured by CZUB the biggest gunmaker in Czechoslovakia, were chosen because they were chambered to fire .375 and .458 calibre rounds which meant they could fell a rhino with one shot. They were imported by disaffected and politically well connected Portuguese citizens with strong financial ties to Mozambique and its political elite, but they were and are not alone, others involved include corrupt police and safari operators. Despite stringent EU laws about gun manufacture and export the importers brought the guns via Portugal into gun retail shops in Mozambique from there they were distributed to middlemen who in turn passed them onto poachers. These high calibre guns equipped with silencers effectively meant poachers became much more efficient and harder to detect. To kill a creature of over 3,000 kg effectively and silently and to be able to hack off its horn and then disappear before any anti poaching units arrive became a whole lot easier with those guns.

Why however would people risk life and limb poaching rhino even with the new weaponry? This is where most people trot out the “pocketbook and cooking pot” theory which leads to a fairly standard response from conservation organisations which promote vegetable gardens and community projects in villages neighbouring most game parks. The answer as to the motivations for poaching are however more complex and are a product of the historical legacy of colonialism which is perceived as having led to the displacement of indigenous populations from ancestral land in favour of animals, which some communities argue are more highly valued than the individuals displaced by the expansion of game parks

Communities bordering game parks often express both disdain and anger for conservation laws and the representatives of those laws which is one of the reasons that they support rather than condemn poachers within their groups. Poaching kingpins are seen as Robin Hoods who defy the government and who in creating and distributing wealth help ordinary people cock a snook at authority. Some of the kingpins go so far as to pose as freedom fighters on an economic front, claiming they are taking back what has been taken from communities. This narrative explains to some extent why despite many community initiatives poachers still find safe harbour particularly around Kruger national Park which has been one of the most heavily poached places largely because it is home to the majority of South Africa’s rhino population. Unlike private game farms which are usually very expensive to access, poachers can and do pose as tourists to get into the Kruger Park.

Communities see a racial element to the conflict which they argue is one which allows wealthy white hunters to pay to kill rhino, while black poachers if caught face long jail sentences. There is however also a generational aspect to poaching which reflects the changing mores and values of society across the globe. Older poachers show concern for their family and community while younger poachers are interested in themselves and accumulating wealth.

A “Get rich or die Trying” motto best sums up their involvement. It is one which allows them to fund lifestyles which feature increasing drug and alcohol consumption within the communities neighbouring KNP. It also means that efforts to dissuade potential poachers from becoming involved are harder to counter.

In 2015 for example, there were 2,500 poaching attempts involving 7,500 poachers with 800 weapons in the Kruger National Park. These are difficult numbers to comprehend and counter especially if one considers that these are only the known numbers, there were probably many more, they simply went undetected. The good news is that since the peak in poaching in 2014 South Africa has been making some headway in reducing the number of rhinos poached but the numbers are still unacceptably high.

The language of war has become the language of poaching and like all wars it really is about winning the peace rather than the war. Over a thousand lives have been lost in this war which has become unsustainably costly. Protecting rhinos in the wild becomes more expensive with each passing year as both poachers and anti-poaching units up the game. There are remarkable organisations across the globe dedicated to rhinos, who pour constant effort and funds into countering poaching, but the money needed to protect rhinos relative to all the pressing needs of other species is what makes the current situation unsustainable. It has also been argued that in some instances where corruption is endemic, the constant pouring in of funds to counter poaching is an inducement to keep it alive. Ultimately the conflict can only end when the demand for rhino horn ends. Until then there literally is only the faintest glimmer of light at the end of the tunnel for the long term survival of rhinos.

WHAT YOU CAN DO TO STOP POACHING AND STOP FUNDING EXTINCTION.

You can support every organisation that focuses on the protection of rhinos but there is also a solution to ending demand for rhino horn and it involves each and every one of us. We have the power to halt Vietnamese demand by boycotting everything carrying a made in Vietnam label. It is within our power to effect change and if we really care about rhinos this is the solution. We cannot fund extinction any longer and we cannot allow companies to remain unaware of their unconscious impact on the destruction of wildlife. All companies have a corporate responsibility to their shareholders and to consumers. You might think you have very little power but you do. If you buy shares or invest in funds you can insist that none of your shares invest in companies invested in Vietnam. You can stop buying anything manufactured in Vietnam. You can tell your family and friends and encourage everyone to do something as simple as read a label on an item to find out where it was manufactured and hopefully chose something else.

If you are a citizen of the EU or of USA then you can lobby for an investigation into the supply of guns from Czechoslovakia and the closing of all loopholes which exporters exploit. The identification of the individuals responsible for the trade can help in limiting their effectiveness. Read the report by Follow the Guns and make your own informed conclusions. www.followtheguns.org/report.php It follows that if we can limit demand and the guns that kill rhinos, poaching will diminish. There is actually a lot you can do in addition to donating funds to organisations like ours which specifically focus on raising orphaned young rhinos. You can make conscious choices and you can with hardly any change to your own life, act to boycott and bring home the message to countries that flout international law, that they will no longer be supported. It’s massively empowering to feel that one is making a difference and you can. The choice is yours and if you ever doubted your power remember a South African proverb which reads: “Anyone who doubts the power of one has not spent a night chasing a mosquito.” Go and save rhinos in the real world, stop funding extinction and become a truly effective mosquito!