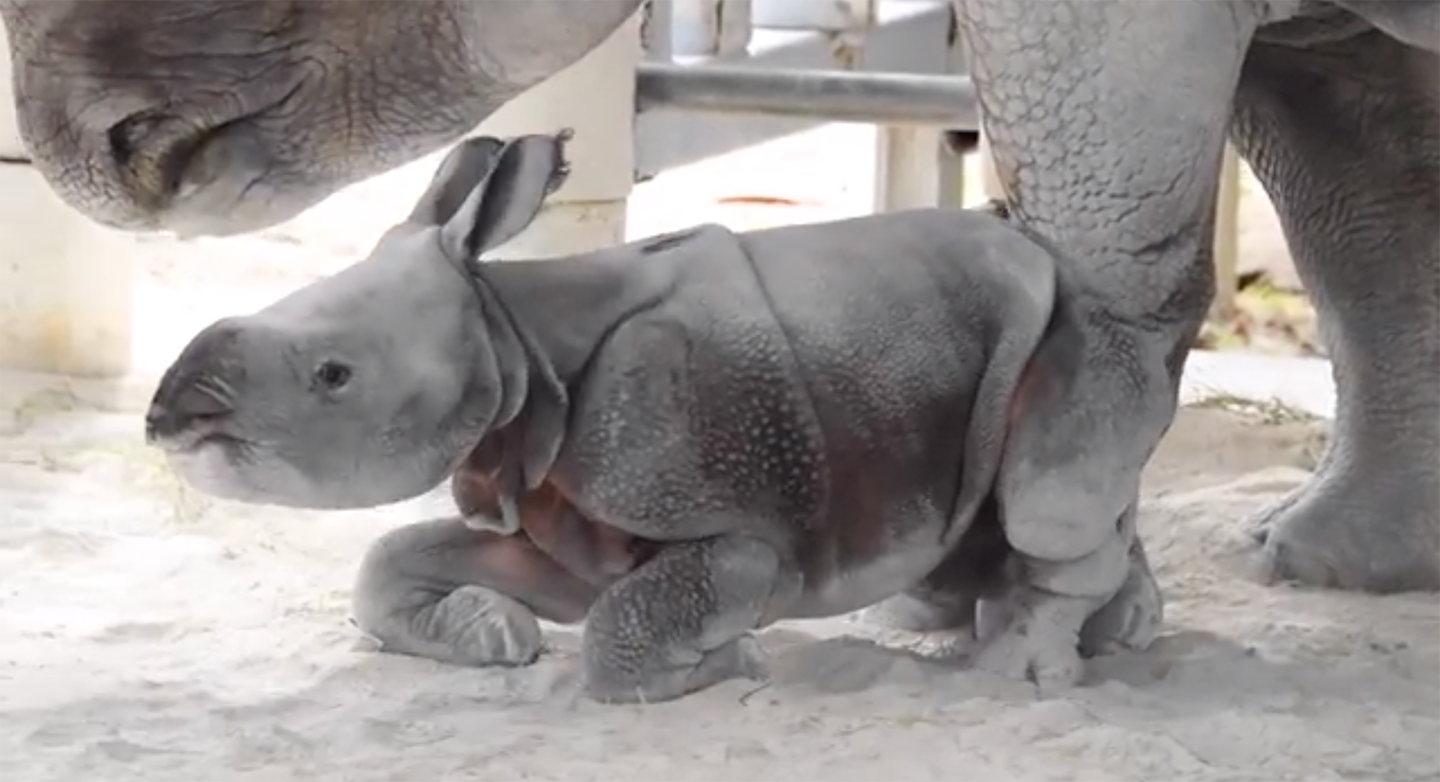 Last week, Zoo Miami welcomed a baby greater one-horned Indian rhinoceros, born to a seven-year-old female named Akuti. The birth marked a big win in the effort to conserve the species, not only because every new calf matters to the struggling Indian rhino population, but also because this is the first time in recorded history that an Indian rhino has been born through induced ovulation and artificial insemination.

The calf’s gender is not yet known, reports Madeleine Marr of the Miami Herald. Veterinarians are waiting to conduct a neonatal exam until after the newborn and its “very protective” mother have had a chance to establish a bond, “which can sometimes be a challenge for first-time mothers,” the zoo said in a statement. But initial observations suggest that the baby is healthy and doing well.

Both mom Akuti and the calf’s father, 18-year-old Suru, were born in captivity at the San Diego Zoo Safari Park, according to CNN’s Amanda Jackson. After the rhinos came to Zoo Miami, experts there tried to encourage them to breed naturally, without any success. So a team from the South East Zoo Alliance for Reproduction and Conservation (SEZARC), which strives to increase the populations of rare and threatened species through reproductive science, was called in to help.

Artificially breeding Indian rhinos, which can weigh between 4,000 and 6,000 pounds, is no simple feat. “With the artificial insemination, we had to first collect the semen from the male,” zoo spokesperson Ron Magill tells Marr. “Once that was done, we had to immobilize the female so that there would be no danger to the veterinarians, who then carefully used an instrument that is inserted vaginally and placed up against the cervix where the semen is then deposited.”

“The challenge is that it has to be timed precisely to her ovulation which was also induced,” Magill adds. “As it turned out, our timing was perfect.”

Once it was confirmed that Akuti had conceived, she was trained to receive ultrasounds so the fetus could be monitored. The pregnancy lasted 15 months, and because zoo experts knew exactly when conception had happened, they were able to keep a close watch on Akuti during the days leading up to the birth.

The arrival of the new calf is “really great news,” Terri Roth, vice president of Asia programs at the International Rhino Foundation, tells Jack Mitchell and Peter O’Dowd of WBUR. “[T]o save some of these endangered species, we need every tool we can get in our toolbox. Assisted reproduction is one of those tools.”

Found only in India and Nepal, greater one-horned Indian rhinoceros were once hunted to the brink of extinction; by the end of the 20th century, fewer than 200 remained in the wild. Thanks to conservation efforts and strict protection by wildlife authorities, Indian rhino numbers have risen to around 3,500 today. But poaching remains a constant threat—largely because rhino horn is used in traditional Chinese medicine—and the IUCN classifies the species as “vulnerable.”

The new baby at Zoo Miami will likely never join its fellow rhinos in the wild. But captive rhinos are vital as “ backup populations,” Roth tells Mitchell and O’Dowd.

“Every birth makes a difference when you’re talking about a species where there’s only 3,500 in existence.”

Read more: https://www.smithsonianmag.com/smart-news/threatened-indian-rhino-born-zoo-miami-180972084/#cdmJh8mZzvxUxkwH.99
Give the gift of Smithsonian magazine for only $12! http://bit.ly/1cGUiGv
Follow us: @SmithsonianMag on Twitter