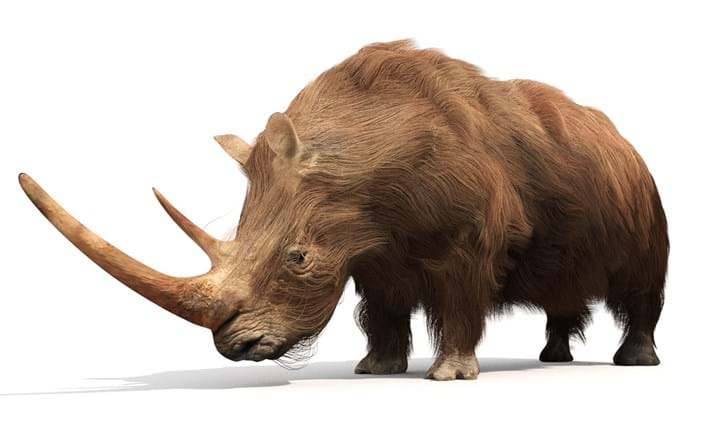 Did you know that rhinos have been around for 55 million years? Although they hardly resemble their ancestors, they have survived ferocious predators, ice ages, and the threat of man. These primitive rhinos include Paraceratherium, the largest land mammal ever to walk the Earth, and Elasmotherium, a creature straight out of Star Wars. 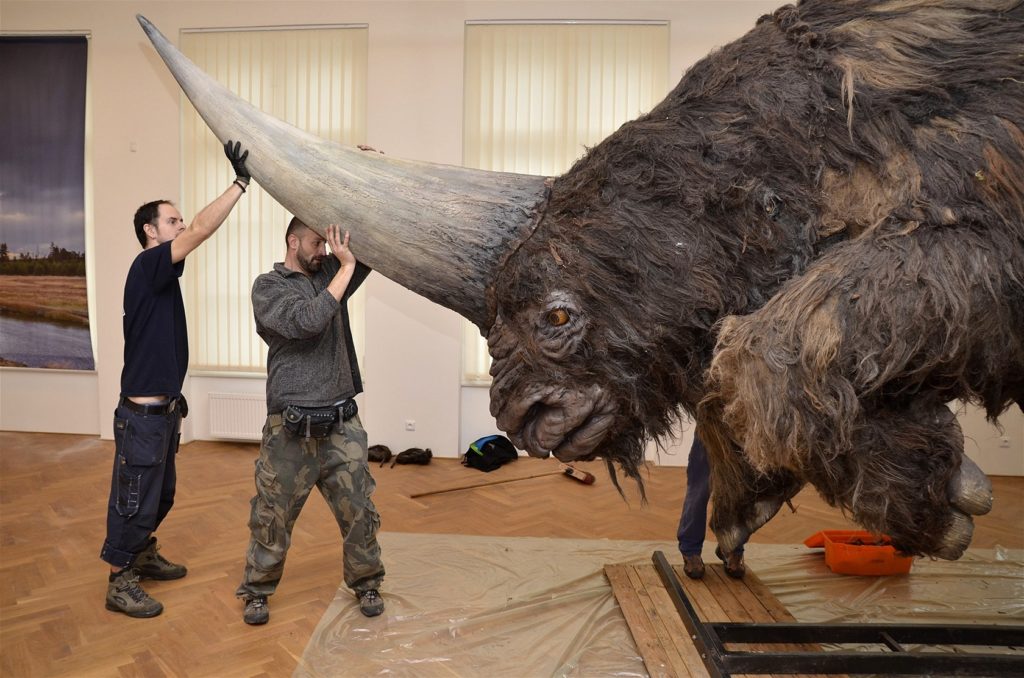 Rhinos belong to a group of animals called perissodactyls, or odd-toed ungulates that also include horses, zebras and tapirs. Evidence shows that they first appeared on the scene around 55 million years ago in what is now known as India. At that point in Earth’s history, temperatures were much higher than they are now and North America, Europe and Asia were covered in heavy forest. Perissodactyls flourished as small herbivores and diversified into many forms. Scientists have names for them – amynodonts, metamynodonts, and hyracodonts. 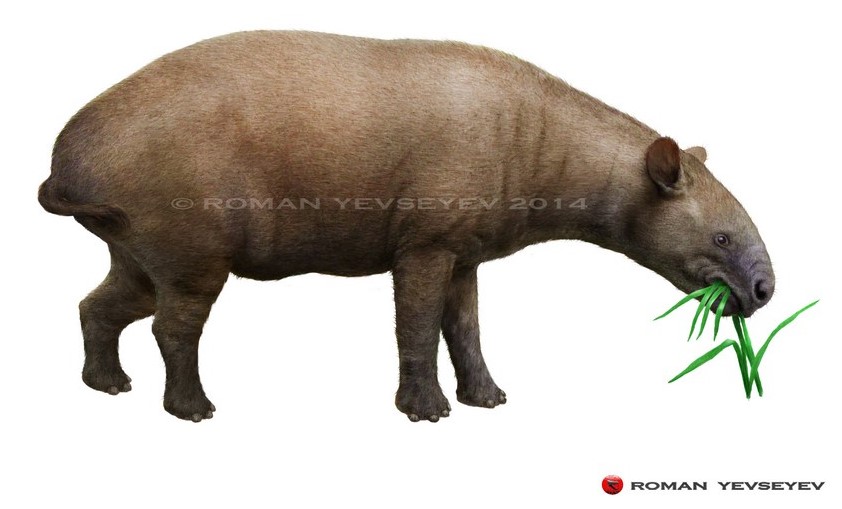 The amynodonts were a group of hornless, large-bodied rhinos that lived in North America and Asia and were believed to have been browsers, like today’s Black Rhino. Scientists believe that all amynodonts in Asia and North America vanished in the Early Oligocene epoch – around 30 million years ago. 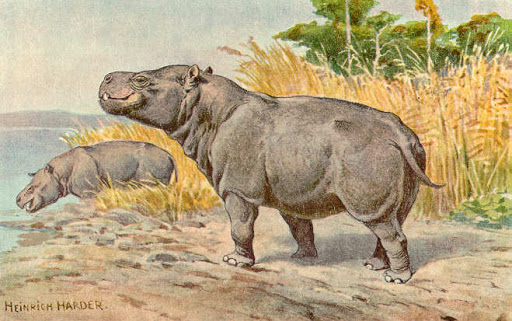 The metamynodon, also appearing in Asia and North America, spent a good amount of their day in the water, much like today’s hippos. Metamynodon was likely a grazer, eating grass and tough plant material at night and living in the water during the day. They went extinct in the Late Oligocene – around 25 million years ago. 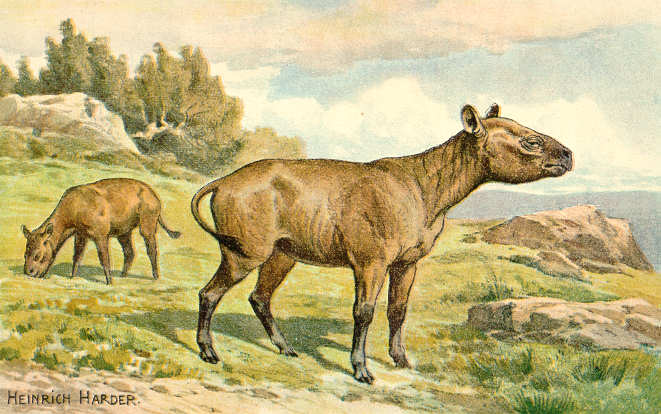 Another ancient relative of today’s rhinos, the hyracodonts, evolved as the surface of the Earth began to change around 35 million years ago during the Oligocene epoch. The Earth began cooling and in response to that, the dense forests started shrinking and savannas, or grasslands became more prevalent. The early forms of hyracodonts were as small as sheep and shared open fields and plains with primitive horses. But as horses adapted to life on grasslands, most hyracodon species could not keep up and went extinct around 26 million years ago.

Notice we said most species went extinct. One group, known as the Indricotheres, adapted by becoming larger. And large they became! This primitive rhino stood a dazzling five meters high at the shoulder – as high as the roof of a house! The going theory behind their size is simple survival – as grasslands replaced forests, they were able to travel longer distances to find trees to feed on. 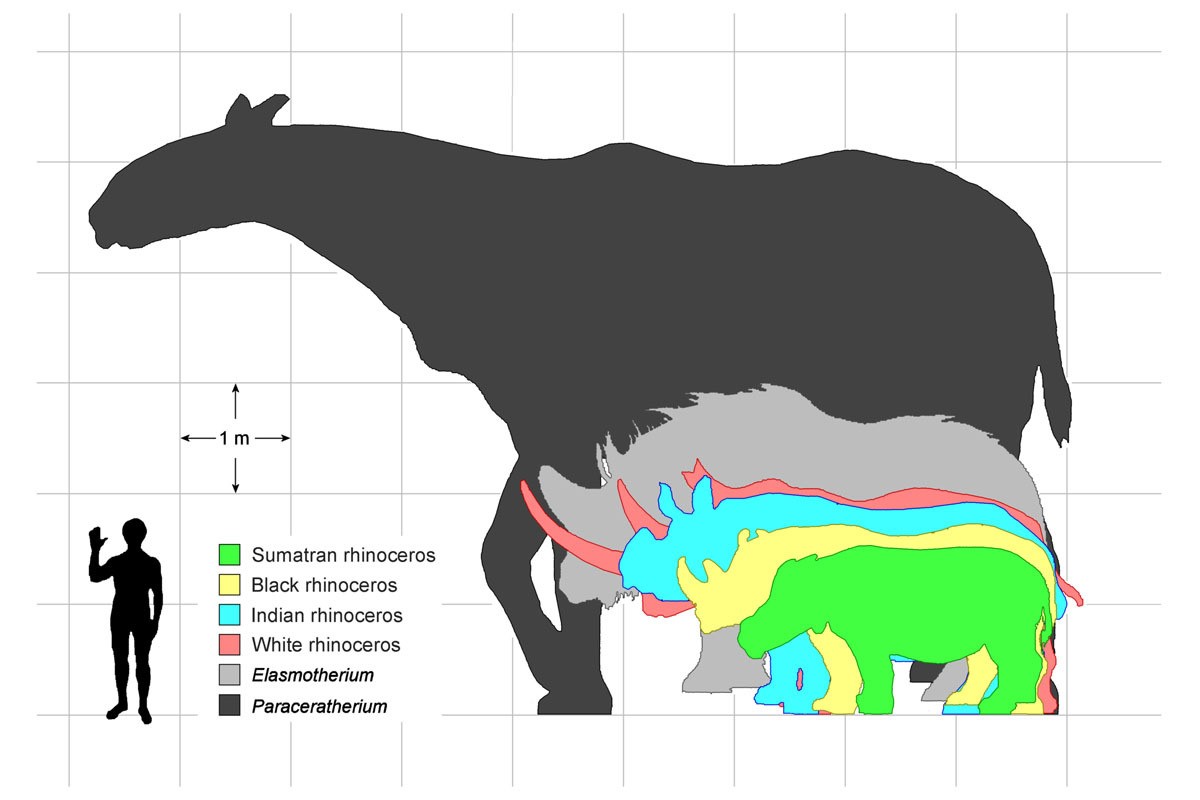 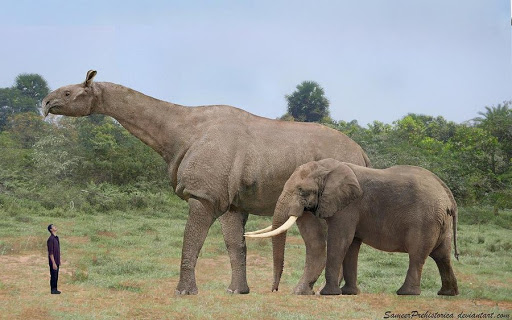 One would imagine this giant inviolable; who was going to tangle with such a beast? But Paraceratherium was hunted by monster crocodiles, vicious giant hyenas and dog-bears. It sounds like a creation served up by Hollywood studios, but it was Earth. The super crocs, Crocodylus bugtiensis, grew to 11 meters long and preyed upon the young. The mammoth crocs would wait in rivers until the mammals came to take a drink and then attack, very similar to their behavior today. The adults also had to contend with giant hyenas and an extinct predator that looked like a cross between a dog and a bear. 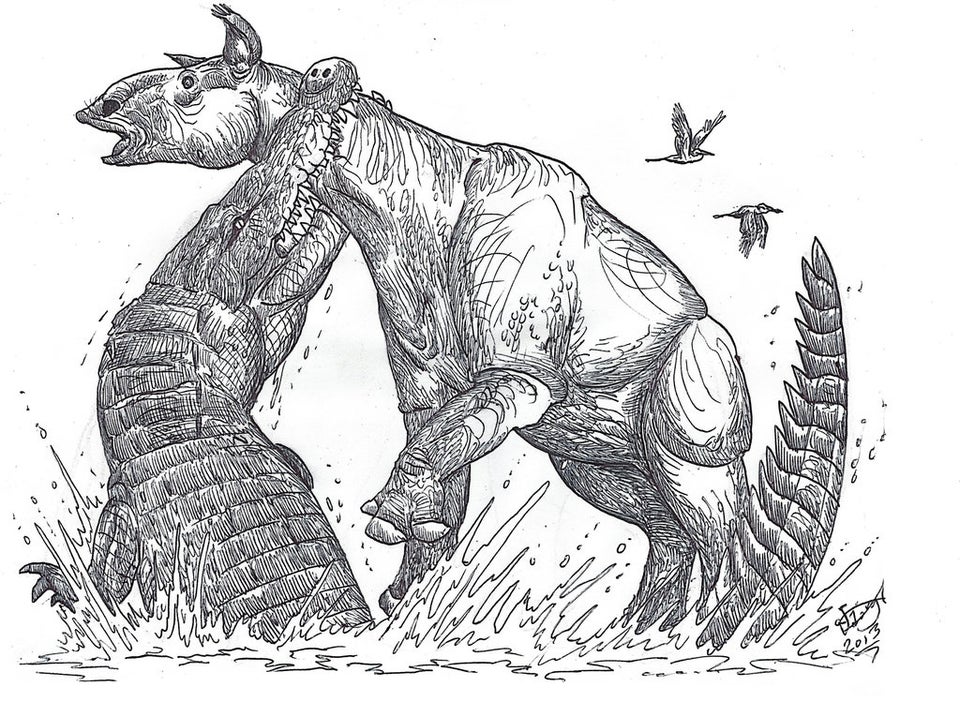 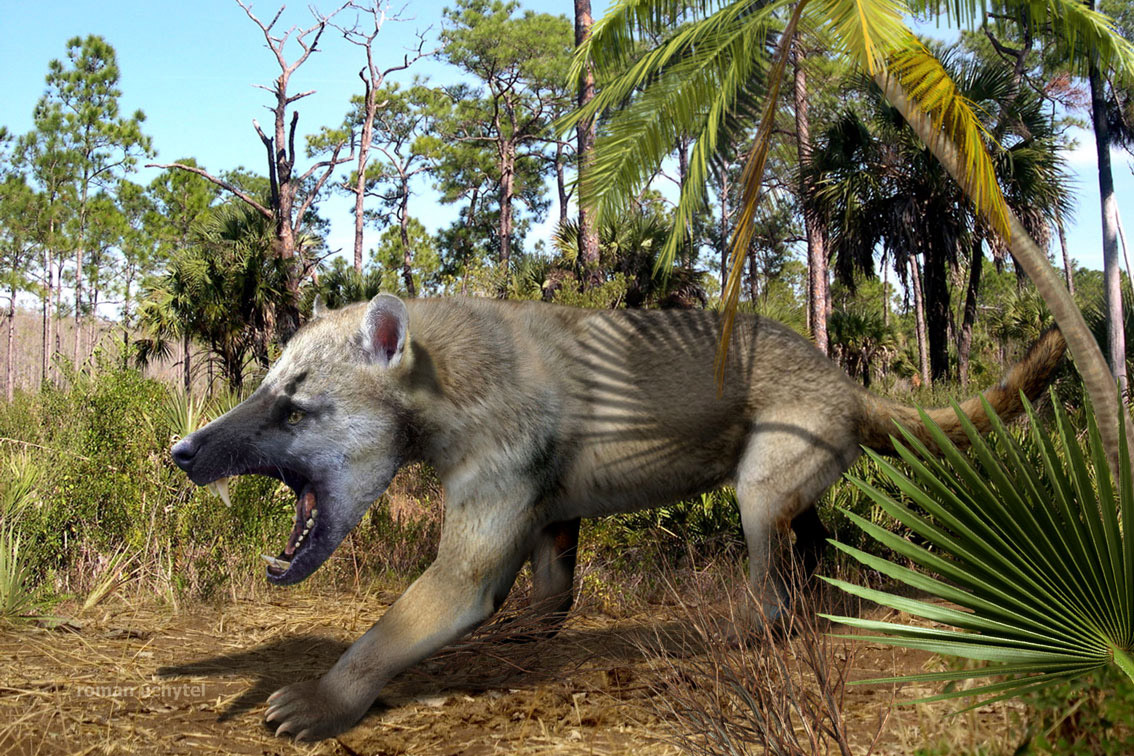 Our white rhinos weigh around two tons; the Paraceratherium weighed 20! A browser, with the same prehensile lip as the Black rhino, supposedly went extinct during the advent of the mammoth elephant, a creature more adept at colonizing all the delicious foliage at the tops of trees. Elephants were more effective super herbivores and bad news for Paraceratherium. 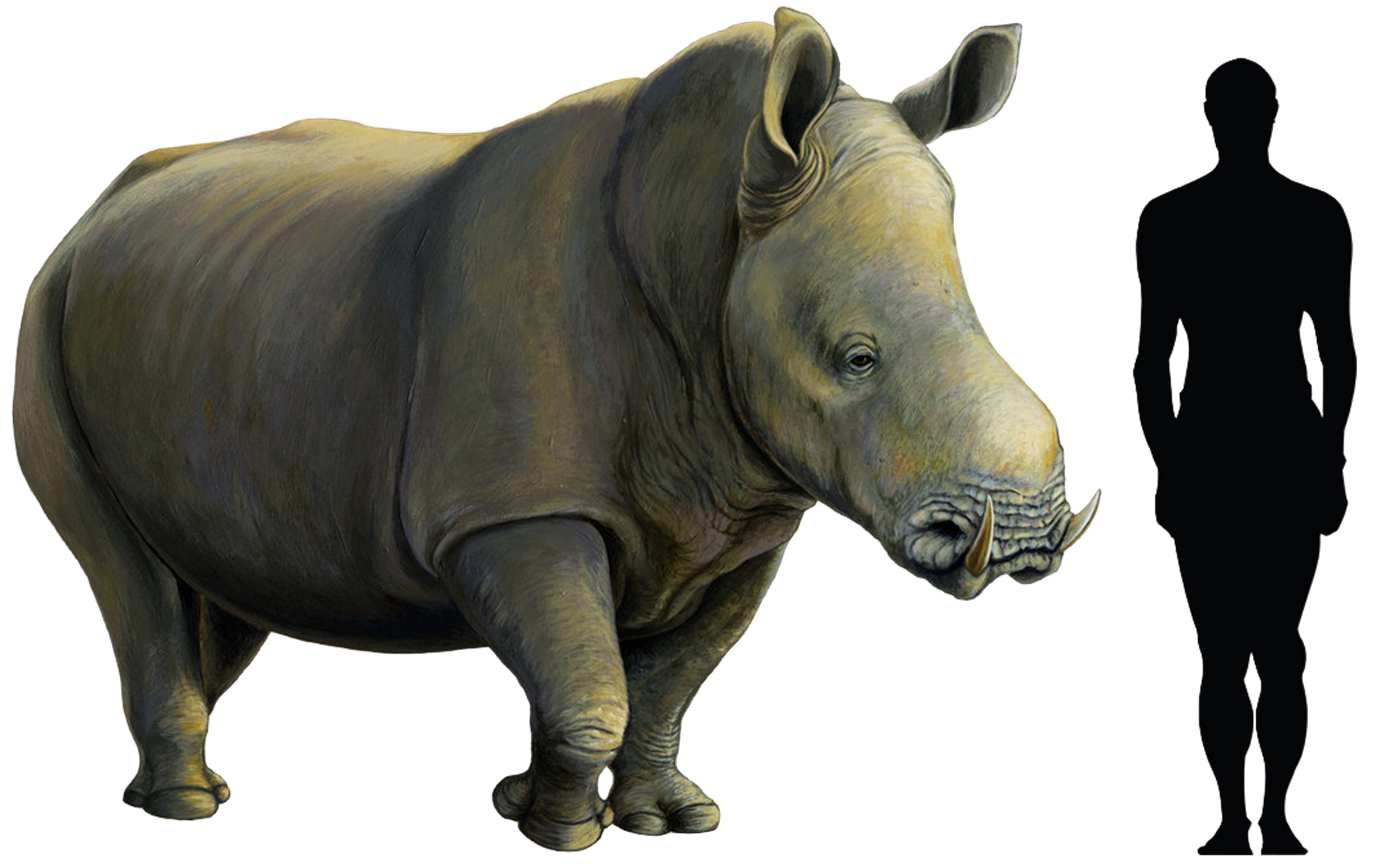 The Miocene epoch came next. Twenty-three million years ago, the planet cooled down and teemed with rhino species of all shapes and sizes. The fossils of nine species of rhinos have been found in Pakistan and a single pond in France contained the fossils of five species. Chilotherium had little tusks, an outsized head, and a skeleton too small to support it so they lived in water, a little like a hippo.

But the great iconic rhino of all time evolved as global temperatures continued a significant cooling over the next few million years. Elasmotherium evolved on wild Earth around 2.5 million years ago, at the beginning of the Pleistocene. Called a Siberian unicorn, the glorious creature stood about three meters high at the shoulder and looked a lot like the rhinos we have on Earth now although substantially bigger. The striking feature was its horn! A single horn grew out of its forehead, in the same way that the mythical unicorn horn is depicted. The base of the horn was half as long as the length of a bed! This is the creature of myths. And quite possibly the inspiration of the mudhorn that the Mandalorian fights. 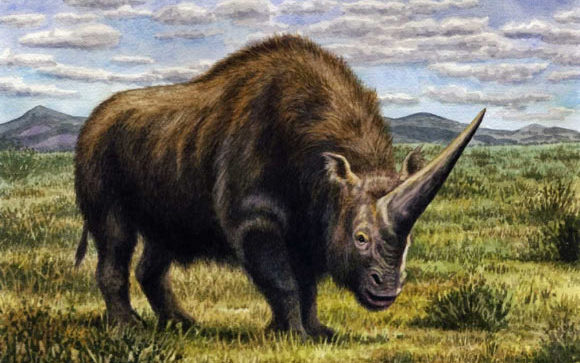 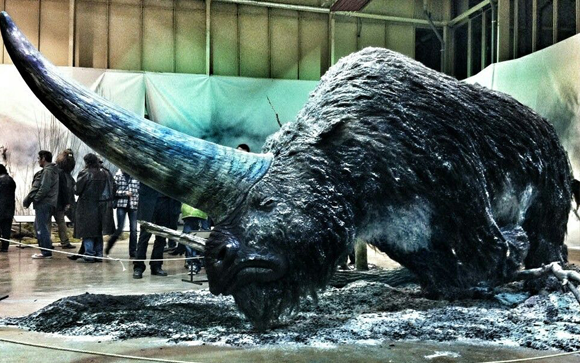 Earth continued to cool for many more millions of years, finally plunging into a deep ice age. Ice sheets spread from the Arctic, covering much of Europe and North America. So, did the rhino perish in the arctic freeze? No, the rhino grew a coat, deep and thick as a bear’s, and toughed out an ice age! The wooly rhinos lived in the rocky snow-free environments of the “mammoth steppe.” 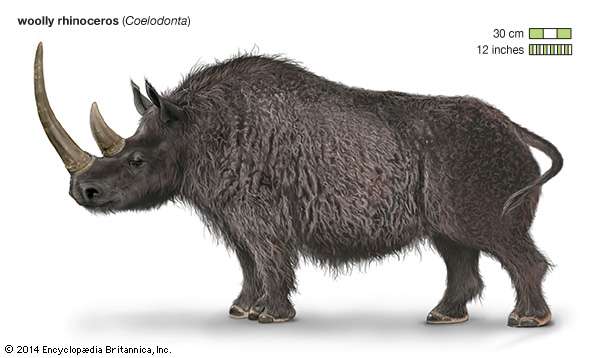 Earth was frozen but there was no shortage of herbs and shrubs to survive on. The clashing continued. The babies of these rhinos were preyed upon by powerful hyenas. Even full grown rhinos could be taken down by these rapacious adversaries. Then, early man arrived on the scene, and well, that wasn’t going to turn out well for rhinos. This, combined with a rapidly changing climate, drove many rhino species to extinction.