Back to the wild   DONATE NOW

Sometimes a story comes along that is very sad but also quite remarkable. Sad, because of what an innocent animal had to endure. But extraordinary because of his bravery. This is the story of Seha, and he is one incredible hero.

Seha’s life started in the way of most baby rhinos. He was born onto a large private game reserve in the North-West Province of South Africa. He stayed by his mother’s side for 3 years, as is the way of baby rhinos. As a young bull rhino, he was ready to leave his mother and find a place of his own. He established a territory and patrolled it. In October 2016, he came across a challenge he had not faced before. A group of poachers, armed with weapons that very few rhinos have faced and survived, began their brutal attack. Seha put up the fight of his life, but it was not enough to stop the poachers from getting what they came for: his magnificent long horns. 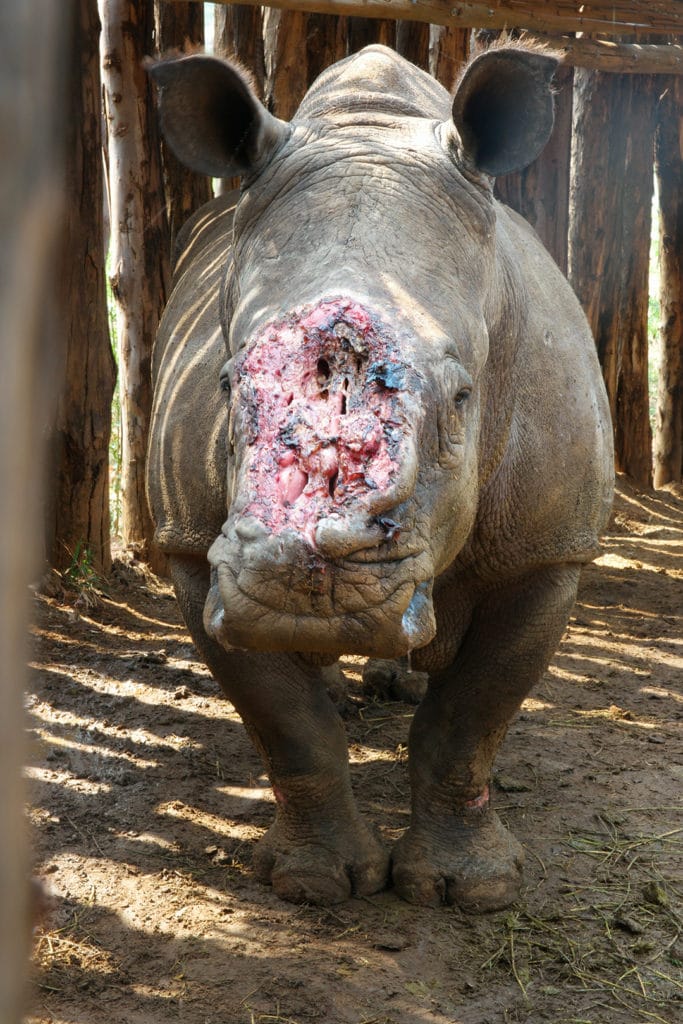 They hacked into his head, intent on getting every last piece of horn, so valuable that on the black market it’s called “grey gold.” The poachers ripped the horns out of his head, gouging out his facial bones, exposing his sinuses. Stripped of his identity and dignity, Seha was left lying in a pool of his own blood. The pain must have been intolerable. But this bull was not going to give up so easily. He mustered up the strength to get up onto his feet and was spotted wandering near the boundary fence by police. Luckily, Seha was not destined to die.

The police contacted Saving the Survivors (STS). Dr. Johan Marais, the legendary wildlife veterinarian who founded STS, said: “Bring him in immediately. We are not going to allows this hero to suffer.” STS stepped in and rescued Seha. He was taken to a secure facility where Dr. Marais began his treatments. And Dr. Marais never gives up! Seha (short for Sehawukele, meaning ‘have mercy on us’ in Zulu) began his long journey of treatments and recovery.

Seha is a true survivor and hero and has endured 30 treatments over two years. A treat was waiting for him as soon as he had healed enough: he was safely introduced to two beautiful rhino cows. Much to everyone’s joy, in June 2019, baby Daniel was born from one of the females, Lucky, who is also a survivor of poaching.

Despite having had so many treatments and human interaction, Seha has never lost his wild instincts. He’s charged his caretakers, including STS’s very own Dr. Marais, who narrowly escaped by climbing onto a nearby fence, just in time. Due to the extent of Seha’s injury, as well as his dominant and wild nature, he cannot stay where he is – it is time for him to be released. It is also important for him to be released with at least one rhino female so he can breed and further the genetic diversity of the species.

The good news is that a well secured reserve, complete with armed guards and an anti-poaching unit, has been found. We need your help in transporting him to his new home and in providing care for him. We have also found two female rhinos who are of prime reproductive age that we need to purchase, with your help. Please join Baby Rhino Rescue in supporting a true super-hero. Seha needs and deserves to live out his life in the wild, patrolling his territory and breeding as a normal wild rhino. Let’s get Seha into the wild again.