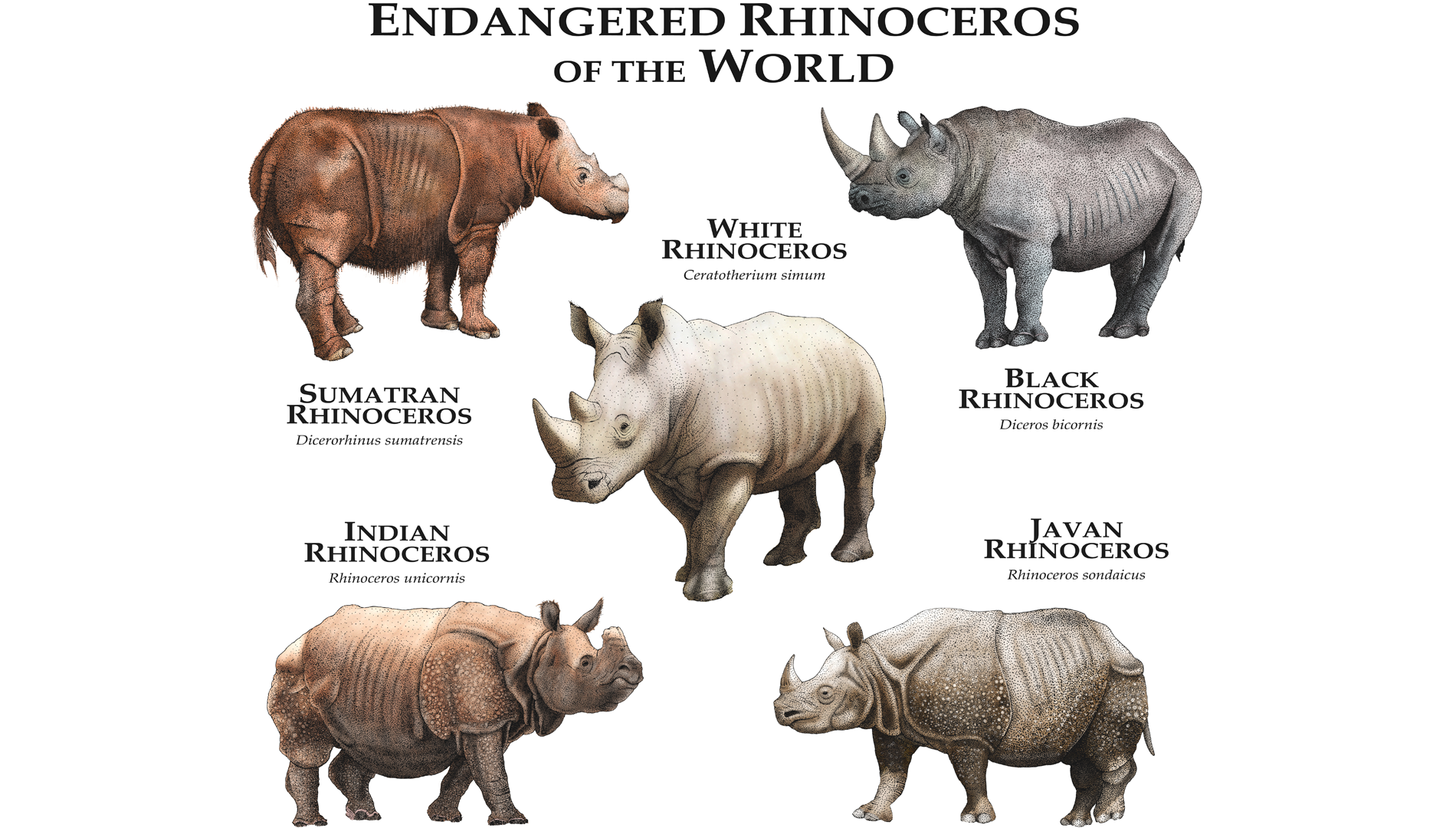 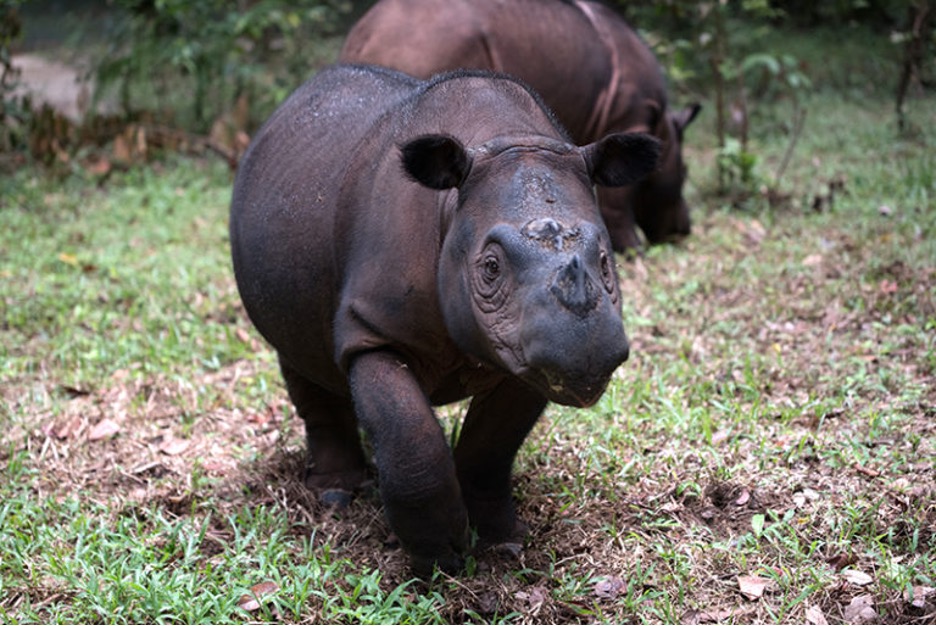 The Sumatran rhino is the smallest of the rhinos that remain. This intriguing looking character is covered with sparse hair, and its head tapers to a thick, bulbous nose. With only 80 individuals spread over the islands of Sumatra and Borneo, is it is critically endangered. There are multiple forces working against the species. The threat of poaching is ever present. Habitat destruction has resulted in the remaining individuals living across two large islands so the possibility of encounters is very rare. But in an audacious plan, the government of Indonesia is working with conservation groups to locate and bring the last remaining Sumatran rhinos to safe breeding facilities. Maybe they can still be saved. 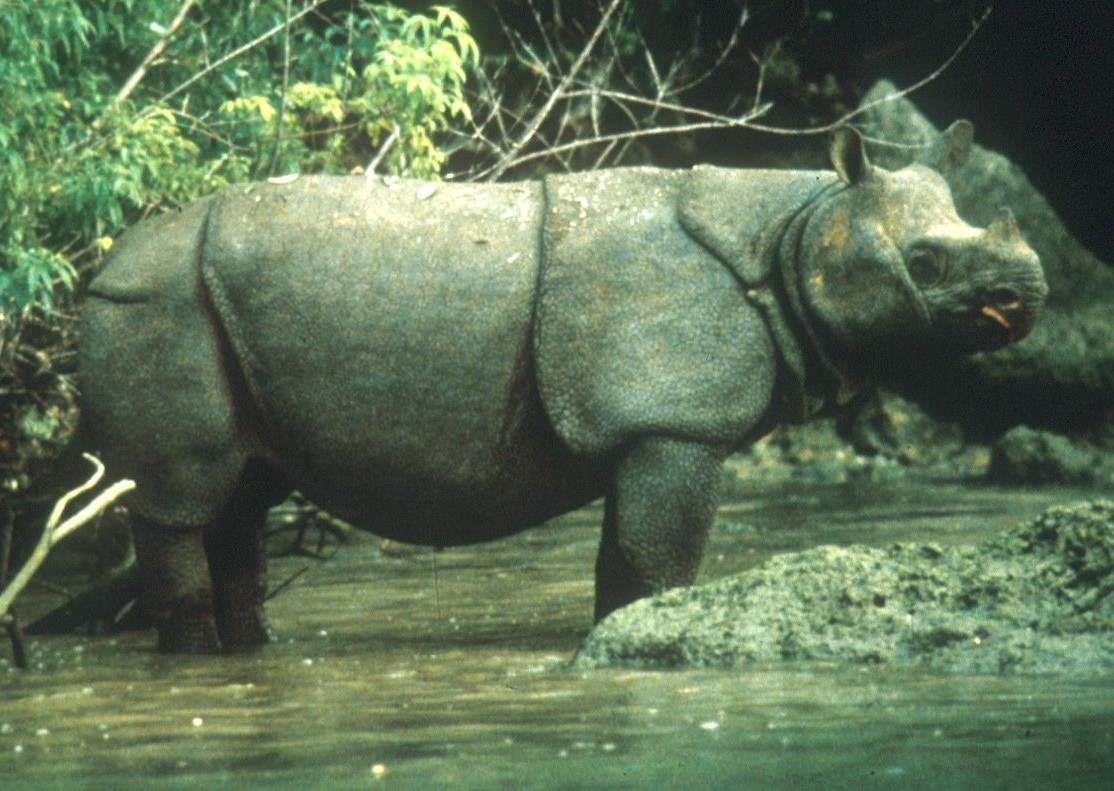 The Javan rhinos once roamed vast tracts of southeast Asia, but we have forced them into a postage stamp-sized area on the western tip of Java. A very long prehensile lip resembles a turtle-like mouth and their single horn is quite small for their size. Thick folds of skin circle it and the Javan rhino appears as though clad in armor. The hide is covered in a thick mosaic pattern which, combined with the armored look, gives this rhino the appearance of an ancient animal warrior. In almost impenetrable wooded thickets a tiny, fragmented group clings to a precarious existence. Extraordinary conservation efforts might keep this exquisite creature from the brink however. The population is guarded 24/7 by Rhino Protection Units and in the past two years, good news was announced: the birth of four calves in 2019 and two calves in 2020 pushed the population to 74! With continued protection, this species just might make it. Watch rare footage of a Javan rhino taking a mud bath on International Rhino Foundation’s YouTube channel: Javan rhino taking a mud bath. 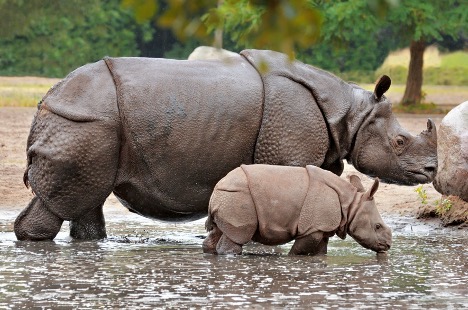 The Greater One-Horned rhino are the largest of the Asian rhino species, weighing in at 4,000 to 6,000 pounds. They live in northern India and southern Nepal, in flooded grasslands and shrublands. They are semi-aquatic, good swimmers and typically forage for food under water. Like the Javan rhino, they also have thick skin folds resembling armor and are hairless except for eyelashes, hair around the ears and a tuft at the tip of their tail. They, like all of their kindred, were hunted to near extinction in the early 19 th century. Now, with strict protection from the Nepalese and Indian wildlife authorities, the population has rebounded to around 3,600 today. 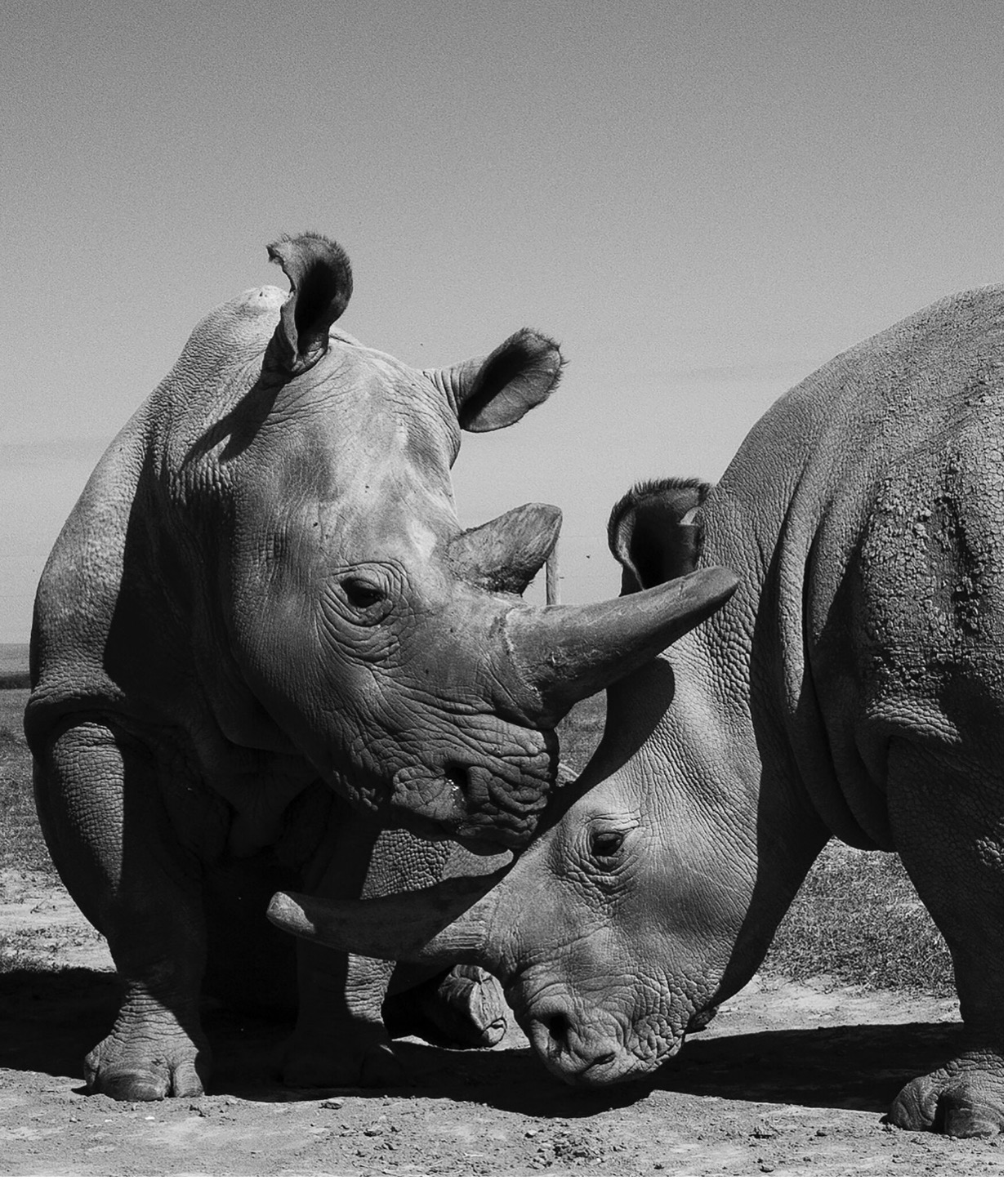 The Northern White rhino is a living, extinct animal with just two females, Najin and Fatu, surviving in Kenya. They are watched over by armed guards 24/7. Work is being done by scientists all over the world to bring this subspecies back from extinction. In late 2019 and early 2020 a team extracted eggs from Najin and Fatu and fertilized them with sperm that had been collected from male Northern Whites before they died. Now, we have three Northern White rhino embryos that are currently in a deep freeze, waiting for the next step: implantation into a surrogate Southern White rhino. 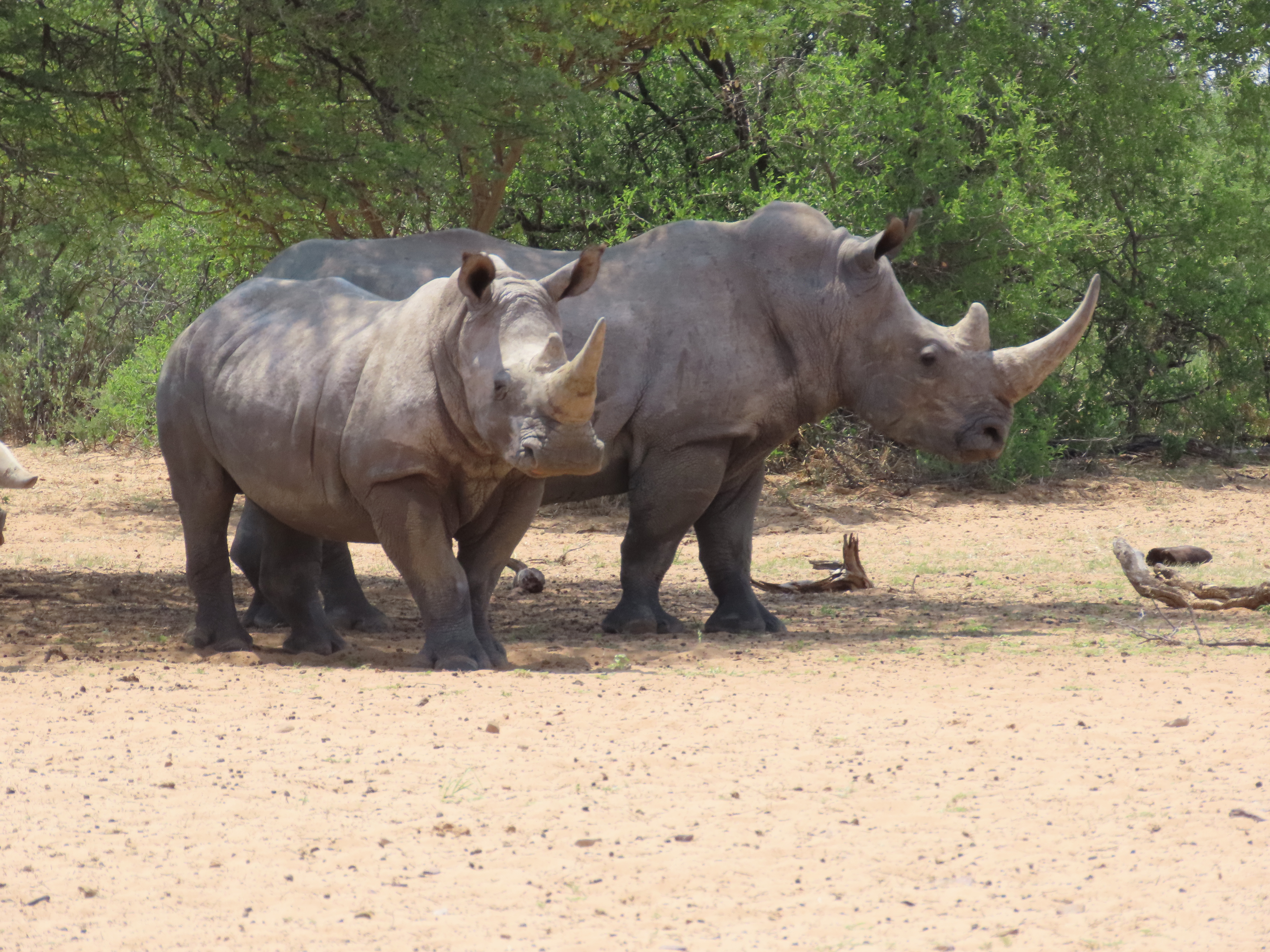 The Southern White rhino is the most populous species, with 80% of the population living in South Africa. A good majority of these live in Kruger National Park, which has seen an immense decline in numbers over the past 8 years due to poaching. They are the largest African rhino species, weighing between 4,000 and 6,000 pounds. White rhinos are grazers and are typically found in grasslands and savannahs where they act as lawnmowers. They cut the grass, which stimulates re-growth and provides food for other smaller herbivores. Males are typically solitary but females will live with their calves and other females in groups known as crashes. 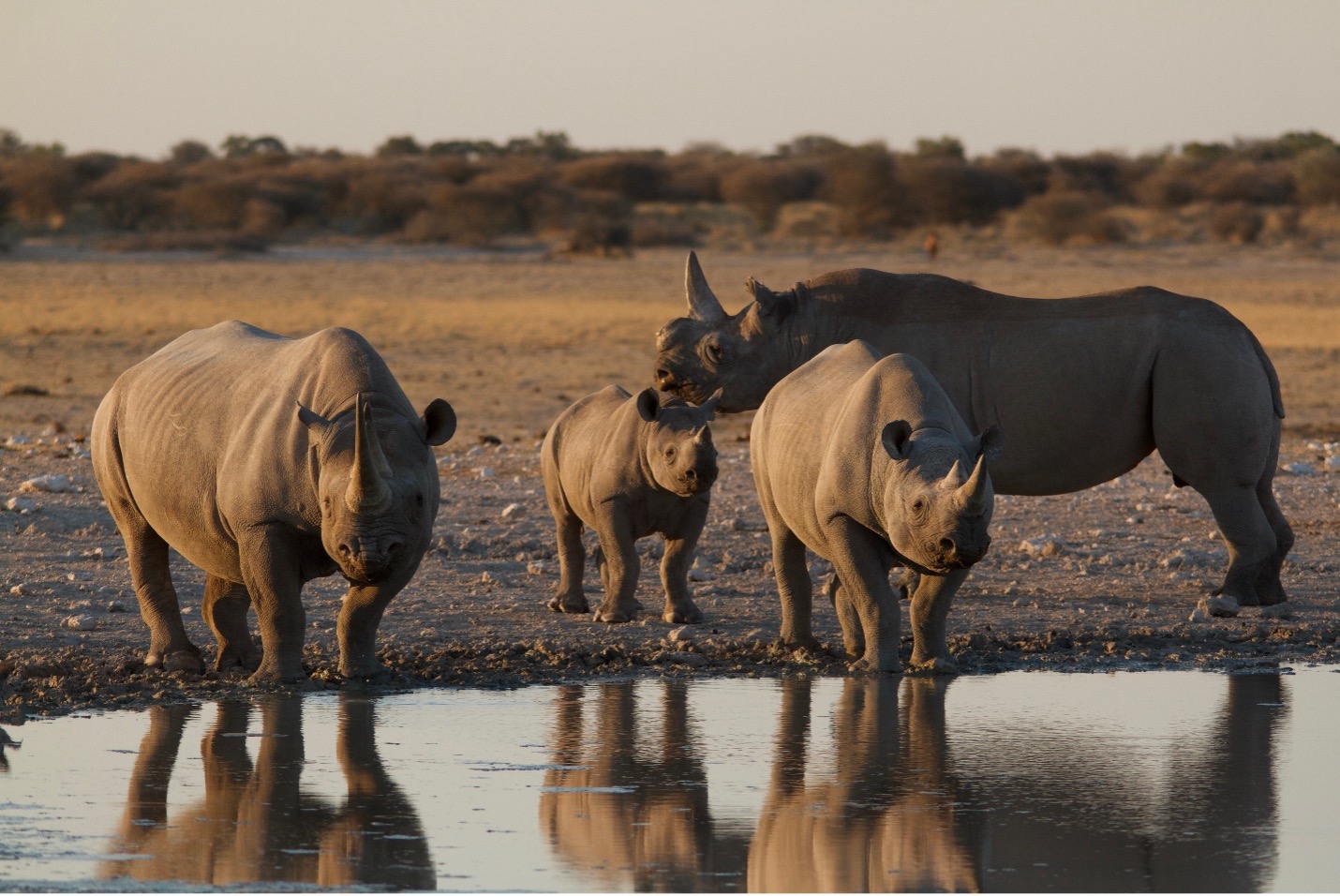 Black rhinos are critically endangered, having gone from the most numerous rhino in Africa to being hunted to near extinction by the early 1990s. At this time, it was estimated that fewer than 2,500 individuals remained. With intense anti-poaching efforts and translocation of individuals to safer habitats, the number has slowly increased to over 5,000. Black rhinos are browsers; they eat leaves and branches from shrubs and trees, using their prehensile lip to grasp them. In this way, they act as eco- engineers, clearing paths for larger animals to use and trimming bushes to allow access for smaller animals to use as shelter.